How do you keep 'Guacamelee' fresh? Memes, memes, memes

When Mexican folklore puts Bachelor Frog in a headlock, this is what you get

Share All sharing options for: How do you keep 'Guacamelee' fresh? Memes, memes, memes

As you make your way through a colorful Mexican village, you wander past a sign advertising a fight between Business Cat and Bachelor Frog. Not far away there's a poster depicting a wrestling duo dubbed Los Super Hermanos — The Super Brothers, one wearing red, the other green, and each sporting a fine moustache. As you'd imagine from its name, Guacamelee, a newly released title on PlayStation 3 and Vita, isn't the kind of game that takes itself too seriously. It's a cartoonish take on Mexican folklore that's absolutely brimming with pop culture references, whether it's other video games or internet jokes. And thankfully, there's more to Guacamelee than just memes — it's also a solid and challenging old-school action-adventure game.

The game puts you in the role of a magical luchadore on a quest for revenge after his love is killed by an evil skeleton. The quest will take you across both our world and the land of the dead, and you'll earn the ability to switch back and forth between realms. This ability can open up new areas, and is used for some tricky platforming and combat sequences — it's also just fun to switch back and forth to see how locations look in both realms. While the normal world is a bright explosion of color, the land of the dead is painted with a sickly purple hue.

You can also turn into a chicken

Guacamelee is structured very much like a Metroid game, with sprawling levels featuring areas that are off limits until you unlock the right ability. It's pretty easy to tell where you can't go, as sections of the world are blocked by colored stones that only specific moves can destroy. You can also turn into a chicken to access hard-to-reach spots. And in keeping with the wrestling theme, there's plenty of combat. You can pull off a pretty satisfying string of combos and there's a whole lot of grappling going on, letting you grab enemies and toss them around the screen. It's especially fun to try and keep them in the air as long as possible with a string of well-timed throws and punches. The whole experience is only a few hours long, but it's definitely not easy — plenty of times you'll be locked in a room fighting off waves of challenging foes, and occasionally the platforming can be a bit frustrating, especially when it requires rapidly switching back and forth between realms.

But in spite of the dark theme and challenging difficulty, Guacamelee is decidedly upbeat. The colors are vibrant, the art style angular and unique, and the enemies look like they've been ripped out of a Disney cartoon. Even when you're being chased by a giant dog-bird monster you can't help but marvel at how charming it looks. And then there are the jokes. The dialog is ridiculous (characters will occasionally "lol"), the characters goofy, and the references plentiful. "For us, references to memes and other games is something we've always done in our previous titles, and has generally gotten a positive reaction from the public," says Chris McQuinn, designer at developer Drinkbox Studios. "Many of the references are there to pay homage either to the games we grew up with and have influenced us, or to newer games that we love and want to recognize as outstanding titles. In Guacamelee we tried to put a Mexican flavor on these references, and thought they were actually quite funny." 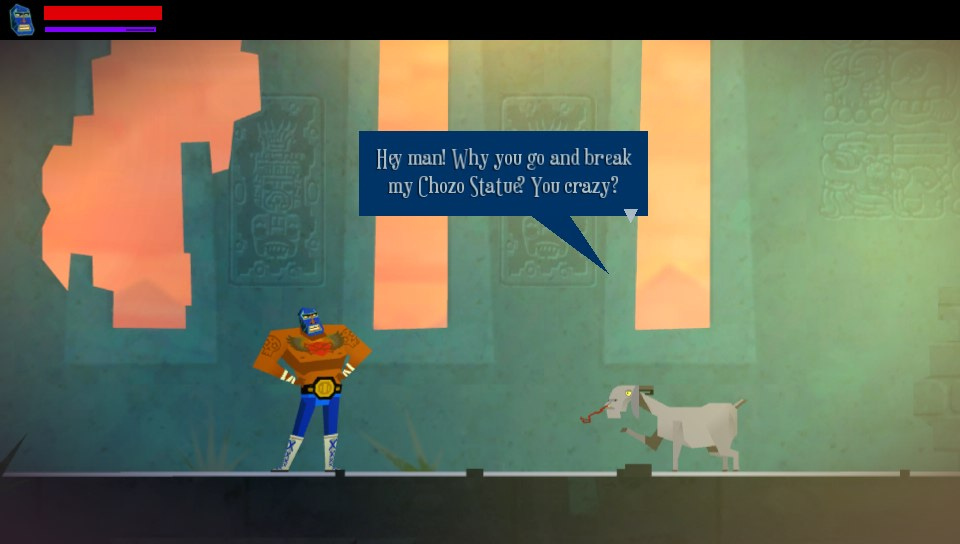 "Some people are bothered by the internet memes."

And there are a lot. You'll see plenty of your favorite games reimagined as posters or shops in a Mexican village, from "Casa Crashers" to a Minecraft-inspired mining supplies store. There's Strong Bad, the O RLY? owl, Grumpy Cat, Pedobear, and even the Ikea monkey. Some of the references are subtle — a few characters from indie hit VVVVVV hiding in a picture frame, for instance — while others are much more obvious, like the luchador version of Wreck-It Ralph, Bust-It Bill. It adds a lighthearted touch to a game about exploring the afterlife, but McQuinn admits that for some players it was a bit much. "It seems that some people are bothered by the internet memes, not the game references," he explains.

Thankfully the memes are mostly window dressing and don't actually impact the game — you can enjoy the jokes, or you can ignore them and focus on body slamming skeletons. However, Guacamelee's influences do manifest themselves in other ways, especially when it comes to design, with constant nods to classic 2D adventures. It's like Super Metroid meets Robot Chicken, but with more pinatas.