‘Dark Touch’ review: a heady horror film that never quite hits its mark

Share All sharing options for: ‘Dark Touch’ review: a heady horror film that never quite hits its mark

Earlier this month we announced that The Verge is partnering with the Tribeca Film Festival for the Future of Film series, and we'll also be reporting and reviewing new movies from the festival through the rest of April.

Some of my favorite horror movies hinge on the strange, private lives of children. Without a sense of what’s normal or comprehensible, filmic children can see truth or survive disaster, somehow knowing both more and less than the adults around them. Writer and director Marina de Van promises to build on the mythology of childhood with Dark Touch, a highbrow horror piece that premiered at the Tribeca Film Festival earlier this week. But despite its potential, Dark Touch gets lost in its attempt to blend genre tropes and quiet drama.

The film’s narrative is established quickly and simply. 11-year-old Niamh (Missy Keating) lives unhappily with her parents and infant brother in rural Ireland, her isolation broken only by contact with a neighboring couple and the students of a small local school. Dark Touch opens after she’s jumped out her bedroom window, convinced that objects in the house have begun to move on their own.

Soon enough, she’s proven right, and her parents are massacred in a bloody attack that police blame on unknown killers. Niamh herself survives physically intact but emotionally shattered; her brother, who she held for hours while hiding, has mysteriously suffocated in her arms. For the rest of the film, the people around Niamh struggle to put her back together while she tries to cope with the murders — and the discovery that she may in fact have telekinetic powers.

These initial scenes set up the film’s contrasts. In many ways, Dark Touch is a traditional horror movie. Hallways stretch and narrow, voices echo, and pale children look over the proceedings with eerie silence. Despite initial stabs at keeping Niamh’s new powers mysterious, it’s immediately clear that she will wreak havoc on the adults surrounding her. The gory results are shown unflinchingly, in sharp, dark tones that buck the film’s usual muted look. Characters are shot from angles that make them seem disconnected from each other or their surroundings, turning them into a collection of limbs and faces that talk, but never really communicate.

It would be easy to say that 'Dark Touch' is a slow burn up to moments of brutality, but that’s not quite correct

But these standard-issue tropes are blended into a quiet, melancholy world full of everyday cruelty and inept attempts to put the world back in order. Niamh, placed in the care of her well-meaning but underprepared neighbors, finds herself unable to cope with the horrors in her past, which are rooted less in her parents’ death and more in the abuse she appears to have suffered at their hands. Though we never find out exactly what happened to Niamh, she sees the world as a series of threats to be avoided or endured. Any moment of vulnerability or openness — even bathing — becomes an ordeal.

The problem is that these two sides of the film rarely connect well. It would be easy to say that Dark Touch is a slow burn up to moments of brutality, but that’s not quite correct. It’s more like watching a restrained family drama intercut with The Omen, as Niamh fights back against those who have done real or imagined harm. To her credit, de Van demonstrates a light touch with the mystery surrounding Niamh, even as new questions start piling up midway through the film. The girl is both terrified and dangerous, but Dark Touch is most compelling when we don’t quite know what she wants or feels, just as she seems unable to separate kindness from cruelty. Sadly, those moments aren’t nearly as frequent as they should be, and she’s left flipping between avenging victim and horror movie villain. 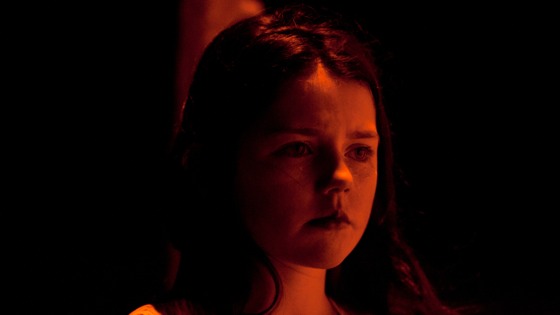 It’s a particular shame because Dark Touch’s driving forces are uncertainty and denial. When faced with collapsing furniture and sudden fires, characters blame themselves for shoddy construction and carelessness — even after Niamh bluntly tells them what’s going on. All this is cliche, to a point, but it serves to underscore the blind eye they turn to Niamh’s trauma. Though everyone in the film either explicitly or implicitly understands that Niamh has been deeply hurt, they do little to help her recover, and the camera focuses on her flinch after every thoughtless touch.

"There must be more to a horror film than mere nuts and bolts if it is to work," de Van writes in the film’s promotional materials. "It requires a slightly transgressive theme." Her assertion hints at how we think about pulp or genre work: it examines universal ideas through media meant to entertain, proudly acknowledging the framework it uses while struggling not to be bound by its constraints. Somewhere inside Dark Touch lie the seeds of a fascinating, unsettling film. The ideas it wants to explore — about childhood, cruelty, and revenge — could work in an understated, enigmatic exploration of Niamh’s life, or as a cathartic and terrifying fable. But it’s hampered by its need for easy resolutions and horror set pieces, neither quite embracing nor escaping its genre roots.