CBS has confirmed on Twitter that several of its accounts were compromised earlier today, including those for 60 Minutes, 48 Hours, and a local Denver affiliate. While the perpetrator of the hijack is unknown, the incident appears similar to actions from the "Syrian Electronic Army," which has targeted several news media organizations with Twitter break-ins. One CBS Denver tweet announced "new evidence of CIA arming Al Qaeda terrorists in #Syria," with another tweet claiming that NATO provided weapons of mass destruction to terrorists "for a false flag operation" in the country. CBS has removed several of the unauthorized tweets, though its Denver affiliate account still appears compromised.

As Reuters reported last August, the ongoing Syrian conflict has spread to the web, with both sides seeding disinformation and propaganda; the Syrian Electronic Army is thought to be responsible for taking over Twitter accounts for the BBC, NPR, and Reuters.

Update: Control of the Twitter account for 60 Minutes has been regained by intruders. Consistent with other takeovers, it appears that the Syrian Electronic Army has taken credit in a tweet from the compromised account. 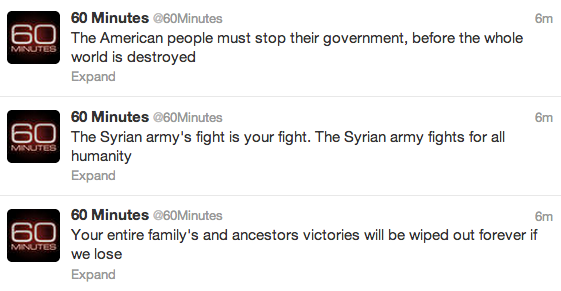