Into darkness: ‘Hiversaires’ is a wordless adventure through an alien world

Into darkness: ‘Hiversaires’ is a wordless adventure through an alien world

Find your way without any directions

"Cryptic" is really the only word that accurately describes Hiversaires. The recently launched iOS game features no instructions, no dialog, and no words of any kind. It's a black-and-white world filled with illegible symbols, and the main challenge is simply figuring out what you're supposed to do so that you can escape. "I wanted the game to feel alien," explains creator Devine Lu Linvega.

"I wanted the game to feel alien."

Hiversaires plays like a fairly traditional point-and-click adventure game, albeit one that's been stripped down to the very basics — think of it like Myst crossed with Year Walk. You poke around on your screen to move from one static location to the next, and there are a few elements of the environment you can interact with, like doors and computer screens. There isn't really an inventory, though you can collect and use batteries to power-up (or power-down) devices that you come across while exploring. At the beginning you're simply dropped into the world with no explanation. It's a strange place, with odd-looking technology and inscrutable symbols virtually everywhere. These symbols are key to opening up new areas to explore, though of course it's up to you to figure out how.

This lack of direction really creates the sense that you're all alone on an alien world, but it can also be frustrating — Hiversaires only takes a handful of hours to play through, but that number is padded by the times you'll likely get stuck. The game doesn't always make it clear when you've solved a puzzle, so you'll often need to explore a bit to see if you've opened up a new area. It's also the kind of game where it's good to keep a pen and paper handy, so that you can remember where everything is and which symbols you're actually looking for — it can be hard to remember whether you need to find the strange fork thing or the weird looking "E." Thankfully the world's alienness makes it intriguing to explore so this isn't too much of a chore, and you can even learn about more about it by exploring Hiversaires' site (it also includes a walkthrough for the first section of the game, if you do get stuck).

It's a world inspired by games like Portal and the works of manga artist Tsutomu Nihei, along with a prototype called Diluvium that Linvega worked on at the Toronto Game Jam in 2012. The ever-present symbols, meanwhile, were inspired by tarot cards, and the art style makes it feel as though you're walking through a black-and-white comic book. The soundtrack adds to the otherworldly feel, with an eerie ambient sound that, strangely enough, can be turned on and off using terminals in the game. And it was all created by Linvega, who in addition to crafting games, also records music under the name Aliceffekt, and has performed at events like the Blip Festival in Tokyo. 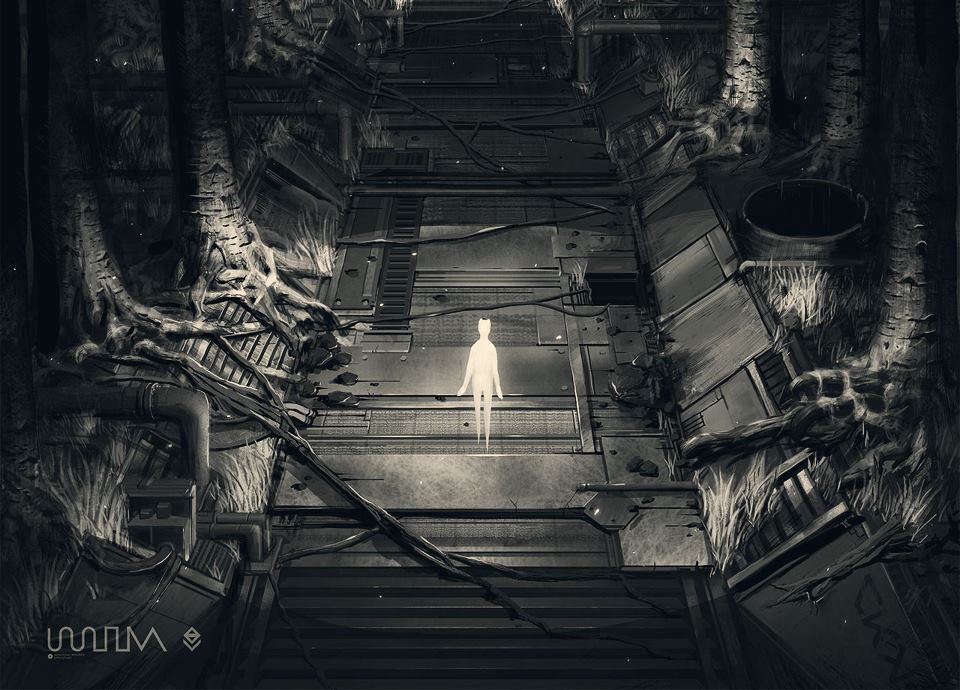 "The game doesn't take you by the hand."

Despite how polished the game is, Hiversaires was only in development for a relatively short period of time — the process began in early February and the finishing touches were completed towards the end of March. "This was my first game for iOS and I didn't want to gamble too much on this experiment," Linvega says of the short development period. It's also his first commercial release, as his previous games and prototypes have all been made available for free. He also recorded his progress over the two month period regularly on the site, explaining that "I always document everything I do." And it's a process that seems to be continuing with his current project, an abstract multiplayer shooter dubbed Waiting For Horus.

As for Hiversaires, while it can be frustrating at times, it definitely evokes the feeling that Linvega was aiming to create. "I wanted it to be clear from the start that the game doesn't take you by the hand," he says, "and that you are left alone in this world."