Grooveshark Broadcast lets anyone be a radio DJ, wacky interludes and all

Share All sharing options for: Grooveshark Broadcast lets anyone be a radio DJ, wacky interludes and all

Grooveshark tried and failed to beat Pandora, Spotify, Rdio, and their ilk as they take on the music streaming industry, so now the company's taking a different tack: giving birth to a new generation of DJs, hosts, and Morning Zoo pranksters. Grooveshark Broadcasts lets users create live streaming playlists, which play in real time as you select songs — sort of like Turntable.fm, only curated by a single host and streamed live to anyone who wants to listen. But you can also provide commentary between songs, interact with listeners via a chat room, and even take requests for songs to play. It's a much more robust, interactive experience than just offering subscriptions to a playlist — you can explain your choices, talk about the playlist, or just make goofy jokes and use sound effects to make fart noises. When you're done with your set, either hand off the mic to another DJ, or your station goes offline. 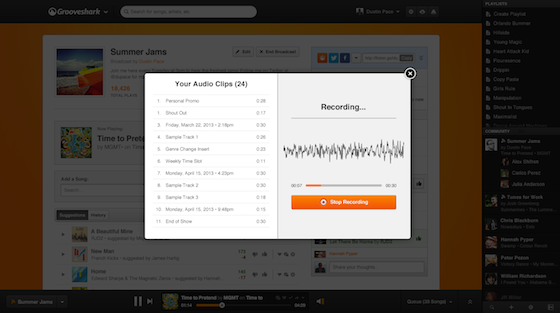 For right now, the options are fairly basic — you can only record 30 seconds of your own audio, though you can also upload your own files if you want to circumvent that restriction. Of course, that same feature has left Grooveshark in considerable legal trouble over the last couple of years, and the service remains in murky territory. For now, though, starting your own radio station is quick and simple, and Grooveshark offers a huge library of music and some clever social features. Broadcast won't technically be available until this Wednesday, but some users can access it already. If the service catches on, we may quickly have more drive-time DJs than we know what to do with.