DirecTV Voice uses your phone to search for whatever you want to watch, anywhere you are

DirecTV Voice uses your phone to search for whatever you want to watch, anywhere you are

DirecTV hopes it's done away with both your clunky TV guide and your clunkier on-screen keyboard searching in one fell swoop. That's the goal of DirecTV Voice, a brand new feature for the company's mobile apps that it announced this morning. The company has long touted the power of its search, demoting the traditional channel-by-channel guide in favor of a more personalized recommendations list and a "trending" list, and now it's pairing that with natural language speech recognition to make it remarkably easy to find things to watch.

At the company's offices in Rockefeller Center in New York City, DirecTV SVP Tony Concalves showed me how DirecTV Voice works. It's all done from your iPhone, which connects to your DirecTV box either via cellular radio when you're away from home or through your local Wi-Fi network. You tap a microphone button on the screen, and say something like, "Show me Yankees games this weekend" or, "Show me comedies by Woody Allen on right now." The guide pops up a list, with lots of metadata — Rotten Tomatoes scores, plot synposes, and the like — along with showtimes and a link to watch the movie or show now if it's available on demand. You can navigate results on your phone or on your TV, at which point the iPhone becomes a trackpad for scrolling and selecting. One tap sends you to your show, and if you're away from home, you can still use the search to record shows or add them to your bookmarks, which is sort of like Netflix's Instant Queue.

You can also start with a broad search and narrow it down. "Find me shows with Brian Williams ... " brought up a number of results; "... on tonight" narrowed it considerably; "... that are comedies" offered no results (despite Williams being a very funny man), so the wizard offered other shows and movies I might like. On the flip side, you can simply tell DirecTV Voice what channel you want to watch, without needing to know its number. "Go to ESPN" goes straight to the right channel, and for all the people who had no idea OWN was even a channel, watching Lance Armstrong's bizarre non-confession would've been as easy as saying "Go to OWN." (If you're at home, you can even watch TV right on your phone.)

DirecTV is working with Nuance on the voice-recognition technology, which means both that the robotic helper sounds a bit like Siri, and that it works remarkably well — I could only stump the system by slightly mispronouncing particularly complicated names, and even when there were no results the app still understood what I was asking for.

It's unquestionably easier than browsing through a giant channel guide, but it's still not a great aimless-surfing tool. I asked what it would take to have DirecTV answer "What should I watch?" and Concalves simply said it wouldn't take much. DirecTV Voice will be in a "very public beta" when it's first released this summer for iOS and Android, and the company hopes to get enough data to be able to start answering your questions before you even ask them. For now, though, it's already a faster, simpler way to find what you're looking for on TV, whether you're looking for SportsCenter, Rock Center, or just something hilarious. 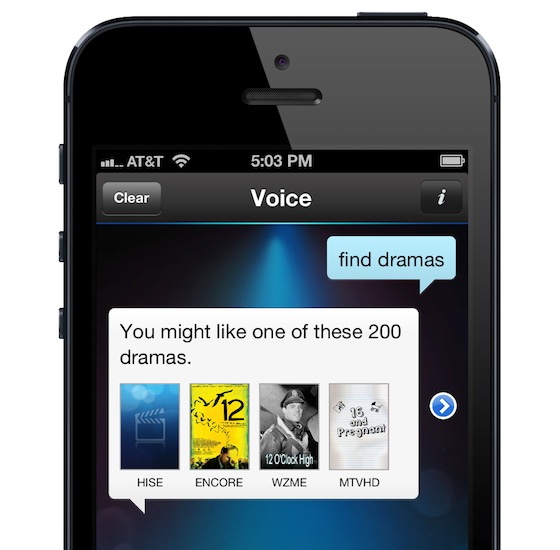