As Foursquare has evolved from friend-finder to expansive recommendations engine, Yelp has emerged as the company’s most formidable enemy. Foursquare’s mobile apps have for some time stood head and shoulders above Yelp’s, but there was always one area where Foursquare lagged: the web. Today, a big update on Foursquare's web app hopes to change that — a fresh coat of paint that front-loads Foursquare's top selling points over its rival.

"This is the place to make a first impression"

"This is the place to make a first impression," says Foursquare’s lead web engineer Mike Singleton. 50 million unique visitors come to the site every month, which is an astounding number compared to the 33 million registered users Foursquare says it has. A large portion of that traffic comes from Google, Singleton says, and that’s where he sees the greatest opportunity to earn new users. In fact, the number of referrals from Google has doubled in the last year, and that trend is expected to continue. Despite ballooning web user numbers, the site had not seen a significant visual update since November 2011.

Foursquare’s new business pages are far more colorful, and put a much greater emphasis on the areas where Foursquare stands out: its ability to generate relationships between similar places and judge appeal based on hundreds of signals like check-ins and likes. The service has to some extent evolved into Pandora, but for restaurants and bars. The tough part is creating pages that work for both "super users" and for the increasing number of people flocking in from Google searches. These are two very different kinds of people, Singleton says. 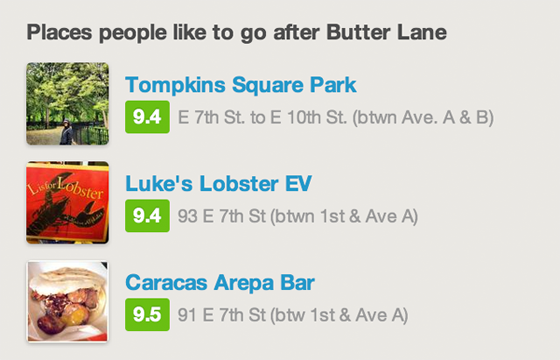 On the new pages, key information is placed up top, such as a place's phone number, hours, address, pricing, and menu, while more Foursquare-centric areas like tips and friends are below. Photos of a place have been promoted to the top of the page, since they best represent what you're going to get. Foursquare optimizes its top photos to be most appealing, and even demotes photos where it has detected faces instead of food. A restructured right rail includes destinations similar to the place you’re looking at, as well as a list of recommendations for what you might want to do next — a handy, borderline creepy feature Foursquare is becoming known for. There are also a few web-only features, like the ability to search the tips area for a particular menu item.

Foursquare has continually developed its dense — yet minimalistic — pages on mobile, and now it has brought a similar effect to the web. Yelp’s 100 million unique monthly visitors may seem far off, but if Foursquare can keep moving up the Google rankings, it might have a chance at dethroning the recommendations giant. The key might in fact lie with Google, which Foursquare must impress if it wants to win at local search. The search engine is Foursquare's number one source of referral traffic. "It’s in Google’s best interest to give users the best pages, and we’re seeing our pages get higher and higher in these rankings," Singleton says.