Most importantly, iPhone sales are fairly flat year-over-year. Apple sold 37.04 million in Q2 2013 versus last year's 35.1 million, a modest growth of seven percent. iPad sales for the quarter were 19.5 million, up a massive 65 percent from last year's 11.8 million, but the average selling price (ASP) dropped fairly steeply year-over-year, likely due to the introduction of the cheaper iPad mini. Apple is selling less Macs than this time last year, with sales down from 4 million to 3.95 million, but the computers it's selling are more expensive — revenue for Macs was up two percent year-over-year. iPod sales continued their slow decline, down to 5.6 million sold from last year's 7.7 million. 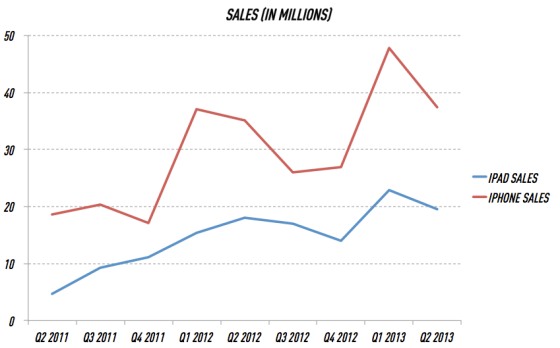 The numbers beat Wall Street analyst estimates, but don't provide a definitive rebuttal to rumors that iPhone demand is slowing down — in this quarter last year iPhone sales were up 88 percent, compared to a bump of just seven percent this quarter. Looking to next quarter, Apple is not expecting strong results. The company predicts "revenue between $33.5 billion and $35.5 billion" for Q3, meaning unless Apple hits the upper end of that guidance, it could be down on last year's $35 billion revenue by as much as four percent. Even still, investors seem to be happy, as the stock is up some 4.5 percent. 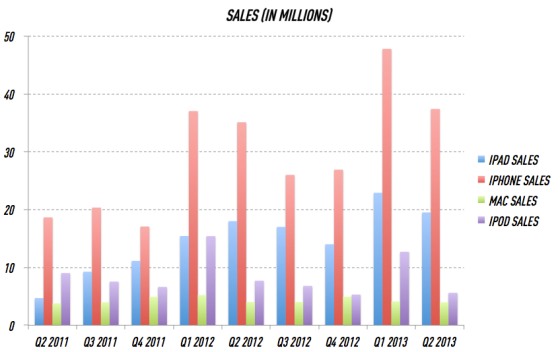 At the same time as releasing its earnings report, Apple also announced an expansion of its share repurchasing scheme, authorizing a $60 billion buyback — a $50 billion increase from last year. To do this, Apple says it will utilize $100 billion of cash until the end of 2015. It also released a few extra stats related to its iOS ecosystem and iCloud: It's now distributed over 45 billion apps through the App Store (up from 40 billion in January), and says it's paid out $9 billion in royalties to developers.

The final milestone announcement of the day was on iCloud, Apple's cloud platform that encompasses iMessage and other services across iOS, OS X, and the web. The company says iCloud has now reached 300 million users after less than two years in operation. Apple CEO Tim Cook and CFO Peter Oppenheimer will be discussing the results with analysts at 5PM ET — you can follow our live blog for all the news as it happens, and you can listen along here.

Update: Apple's earnings call is over, and as usual there were a couple of interesting takeouts. When quizzed on the possibility of a bigger smartphone from Apple, Tim Cook said the company "would not ship a larger display iPhone" while certain tradeoffs exist. Cook went onto tease an "exciting new product category" that Apple would introduce soon.