Drafts, the iOS app for capturing text and transforming it into software actions, has been updated to version 3.0 today in a release focused on managing users' growing number of notes and the tasks they perform with them.

Drafts, for the uninitiated, is a year-old note-taking app from Agile Tortoise whose power lies in its ability to parse and route text around the operating system. Opening the app reveals a plain white square, a blinking cursor, and an invitation to start typing. But as soon as you stop typing, the note can be sent as an email, converted into a calendar appointment, or posted on Twitter, among many other available actions.

Drafts can be the place where all text starts on iOS

For its vocal fans, Drafts has become the place where all text starts on iPhone and iPad. As a result, users' lists of notes are starting to grow unwieldy. Drafts 3.0 brings some relief by dividing notes into four tabs: an inbox, for new drafts; an archive, for older notes; a pin, for quick access to important notes; and all notes, which shows you everything.

Notes can be moved from tab to tab using simple swipe and tap gestures. Or you can establish defaults for what the app should do after you complete different actions — archiving tweets after they're posted, for example, or deleting appointments once they have been sent to your calendar app of choice.

Just as users' notes have grown, so have the number of actions that Drafts can perform with those notes. Until now, all actions were confined to a single, scrolling list. With 3.0, Drafts lets users organize actions into four different tabs. The first tab might contain your most-used actions; the second tab all email related actions, the third tab Evernote actions, and so on. 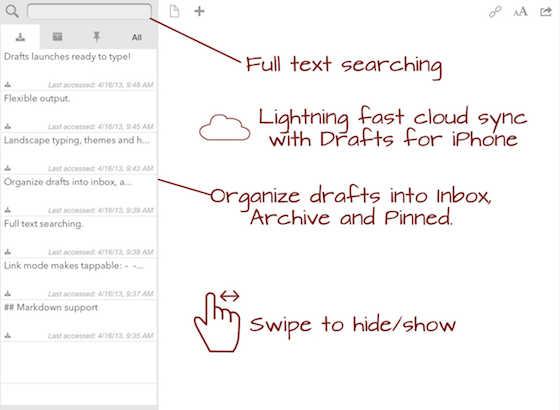 And speaking of Evernote, Drafts 3.0 brings with it an entire set of actions designed to be used with the popular "remember everything" service. The app already had the ability to save drafts to Evernote, but now you can create templates organized around tags and notebooks. Drafts 3.0 also brings with it the ability to append or prepend text to an existing file in Evernote — a helpful feature for those who keep running lists of things, and one that makes Drafts feel more like a Quicksilver-style launcher app than it does a mere notebook.

"I try to stay focused on two key areas to shape the app — quick capture, and flexible output," said Greg Pierce, the developer behind Agile Tortoise, in an email to The Verge. "For the first, that means the app has to get out of the way and make it as easy as possible to get text into the app. For the second, it means continuing to add support for more services and more clever ways to integrate with other apps on iOS."

For an app with such a simple appearance, Drafts is growing surprisingly ambitious. For basic use, it remains a fast and easy way to jot down notes on the go. But for those who work with text all day, Drafts can also become the center of your mobile workflow. With version 3.0, an app beloved by power users has grown significantly more powerful.