Transform Tokyo into your own musical light show

Share All sharing options for: Transform Tokyo into your own musical light show

The Tokyo City Symphony is like nothing we've seen before. Using an incredible 1:1000 scale model of Tokyo created for the city's 2009 bid for the Olympic Games, the website allows you to project your own musical light show onto the cityscape and add it to a crowd-sourced symphony.

Centered on Tokyo's Roppongi Hills mega-complex (the project was created to mark the tenth anniversary of the complex's opening), Tokyo City Symphony lets you choose from three different sets of music and light loops. You can then program in your own 16-bar loop using your keyboard. Our favorite set was "Rock City," which projects colorful monsters across the buildings in time with horns and samples. The other loop sets, "Edo City" and "Traditional Tokyo" are also both fun and worth checking out. 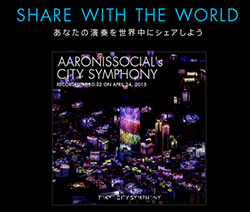 After you're all finished with your loop, you'll have the option to add your name and an avatar that will be displayed alongside your opus. You can also share a link through Twitter, Facebook, or Google+ that will start the symphony with your loop. So far, the symphony, which plays on the site's front page, runs over six hours long, with over 3,000 contributions forming 48,000 bars of music. It's free to join in, so go wild and share your musical genius in the comments below — here's ours.