The next Xbox will be revealed on May 21st

The next Xbox will be revealed on May 21st

Microsoft's next-generation Xbox will be revealed on May 21st, 2013, an invitation from the company has revealed. The announcement from Don Mattrick and the Xbox team, titled "a new generation revealed," will take place at the company's Xbox campus in Redmond, Washington.

Microsoft says that the event will "mark the beginning of a new generation of games, TV, and entertainment," and will stream the event to the public on Xbox.com, Xbox Live, and on Spike TV. "We are thrilled to pull back the curtain and reveal what we've been working on," writes Xbox Live's Larry Hryb ("Major Nelson").

The announcement lines up with earlier indications that Microsoft would unveil its new Xbox in May. Sources familiar with Microsoft's Xbox plans earlier revealed to The Verge that the event will be at a small venue with a focus on providing the first details on the new Xbox, codenamed Durango. Like Sony's PlayStation 4 announcement, Microsoft will hold a preliminary unveiling with a larger reveal promised for the E3 conference in early June, where it will "continue the conversation and showcase our full lineup of blockbuster games."

Read More: The New Xbox: what do we know about Microsoft's next console? 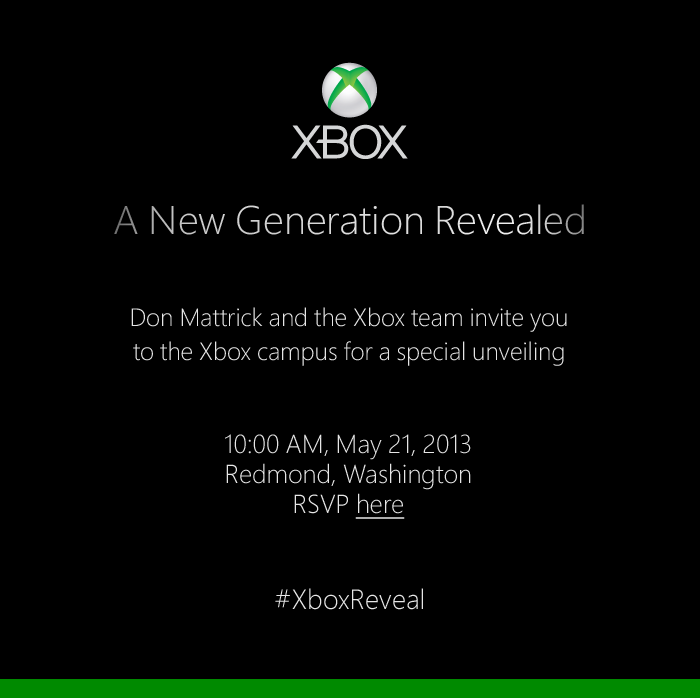