No more fun and games: Zynga earnings wither as users flee the farm

No more fun and games: Zynga earnings wither as users flee the farm

The fun and games at Zynga are truly over. The social games company behind such hits as FarmVille and Words With Friends reported revenue of $263.6 million in its Q1 2013 earnings today, a drop of 18 percent year-over-year, as Polygon reported. Even worse, adjusted before-tax earnings (EBITA) were $28.7 million for the quarter, down a whopping 66 percent from the same quarter in 2012, and earnings-per-share were just $0.01 (one cent) for this quarter. The earnings did manage to beat Wall Street analysts' low, low expectations, but that's not saying much, especially since the fourth quarter of 2012 saw alarmingly bad earnings, too. 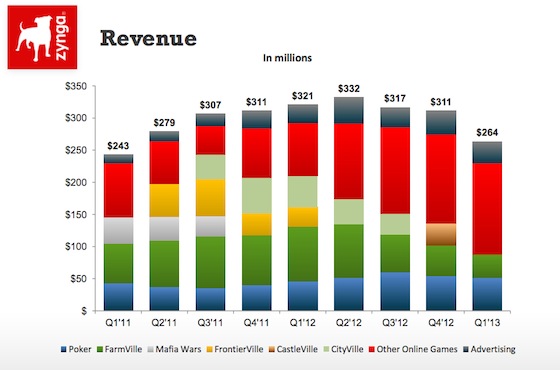 But perhaps most worrisome of all for Zynga, and its investors and supporters, are the latest metrics on users. Daily active users have continued their slide to 52 million, the lowest amount in the past nine quarters. Monthly active and unique users aren't looking much better, at 253 million and 150 million, respectively — among the lowest in the past two years. 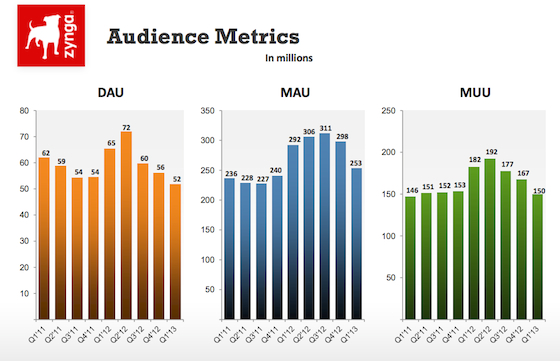 Zynga's Q1 2013 earnings call is going now, and we'll update with important information as it proceeds.

Update: Zynga cofounder Mark Pincus announced Draw Something 2 will be launching tonight. Zynga chief financial officer Mark Vranesh said that while the launch of FarmVille 2 last year was a hit beyond Zynga's expectations, "We are seeing increased decay rates, particularly on the web." Zynga's other staple, Poker, was also "negatively impacted by fraudulent activity." Pincus said that the company is trying to leverage its franchises, such as through an upcoming fitness gaming app called Running With Friends, but that even with that and other new launches coming down the pipeline, "2013 remains a transition year and we continue to expect uneven, nonlinear results," including a decline in Q2 bookings.

Regarding Zynga's tempestuous relationship with Facebook (Facebook took a 30 percent of Zynga in-game purchases on the social network, but the two moved to adjust their partnership to allow Zynga to collect revenue outside Facebook, on Zynga.com, evading the tax), Pincus said: "we continue to have a very strong relationship with Facebook around the business we have on the web." That said, Pincus and other Zynga executives have repeatedly stated that their new strategy for the rest of 2013 and beyond includes moving to mobile gaming, more traditionally hard-core gaming such as RPGs, and "real money gaming," or gambling.