Run-flat tires equipped with a pressure monitoring system. All-wheel drive. Adjustable, electronically-controlled ride height. A top speed brushing up against the magical 200 mph mark. These thoroughly modern specifications could easily describe an exotic car from the world’s most exclusive automakers that you might buy today, if were you lucky enough to have a few hundred thousand dollars to spare — but this isn’t today. It’s 1986, and the car is the Porsche 959.

First shown off as a concept car in 1983, Porsche ended up making the 959 as a so-called homologation special, effectively a race car that had been modified just enough to become street-legal. It was a way for Porsche to prove to the Fédération Internationale de l’Automobile (better known by its acronym, FIA) that it was putting a real car on the course — not a purpose-suited race car unavailable to regular customers. Production homologation was mandatory to participate in FIA’s hardcore Group B rally category, one of the most dangerous and captivating racing series of the modern automotive era. (By contrast, it isn’t a requirement in FIA’s best-known brand, Formula 1.)

Production homologation is a quirky rule in a handful of racing series around the world that has produced some of the most exceptional road-going cars the world has ever known. Over the years, homologation specials like BMW’s M3 GTR, Mercedes-Benz’s CLK GTR, and Porsche’s own 911 GT1 Straßenversion (literally “street version”) have developed a reputation for being both exceptionally rare and exceptionally expensive. In the 959’s case, it was also simply exceptional.

By 1983 Porsche already had a great thing going with its flagship 911 model, the Coke bottle of sports cars: instantly recognized the world over and practically unchanged in the 50 years since its introduction. That was part of the problem. The 911 — particularly the 911 of that era — is a car steeped in tradition, not innovation. Its bizarre weight distribution and rear-engine, rear-wheel drive configuration made it notoriously difficult to pilot well. It used a primitive air-cooled engine.

With the 959, Porsche made a car that was everything the 911 was not. It was a technological tour de force, focused solely on — as Wired transportation editor Damon Lavrinc puts it — “creating the fastest driving machine on the road, no matter the conditions.”

“Late ‘80s, the 911 was on par with the [BMW] E30 convertible for yuppie mergers and acquisition-types. The 959 seemed to right that wrong in my mind,” Lavrinc says. “It was driver-focused engineering distilled into its purest form.” 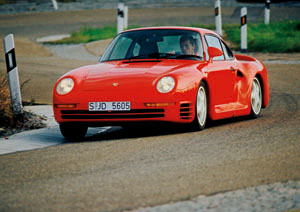 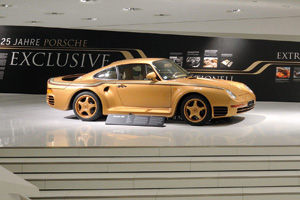 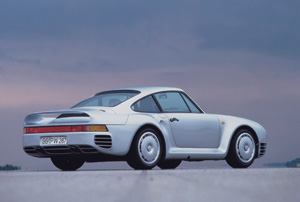 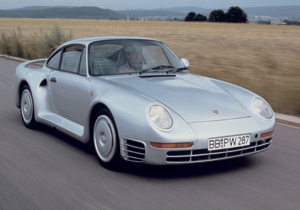 But what made the 959 most impressive wasn’t the fact that it was a superlative supercar; so were the Lamborghini Countach and Ferrari 288 GTO of that era. What sent it over the top was that it seemed as if it had been beamed from the future. Countless performance features on the 959 were completely unheard of at the time of its release in 1986, including a 6-speed manual transmission (most were 5-speed at that time) and the first sequential twin-turbocharger on a production car, limiting the dreaded effects of “turbo lag.” And as Lavrinc notes, it would be another 20 years before other performance cars would fully embrace variable all-wheel drive the way the 959 did.

Needless to say, all this technology translated into impressive stats. Porsche claimed a top speed of 195 mph. Quoted 0-60 times range from 3.6 down to a face-melting 3.0 seconds — astounding figures even by 2013 standards. And if those numbers didn’t drop your jaw, the price certainly did: £150,000 in 1986, which works out to nearly $600,000 in American currency today. You could buy six brand new 911s right now with that kind of money.

Only around 300 959s were ever sold, making it something of a holy grail in the Porsche community. They hold their value, and the odds of you or I ever sitting in one — much less owning one — are astronomically low. Jerry Seinfeld, a well-known Porsche enthusiast, owns a white example. But the most famous 959 may belong to Bill Gates. 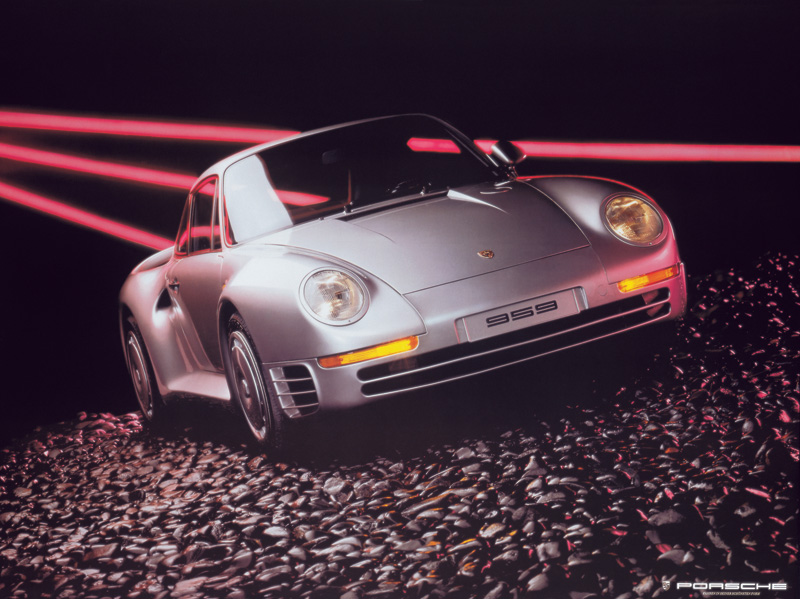 Though it was specifically designed to be street legal, Porsche actually hadn’t gone through the motions to clear the 959 for use in the United States; it hadn’t been crash-tested in line with safety requirements and didn’t meet EPA standards. Legend has it that Gates ignored this technicality and tried to import a 959 himself, only to have it impounded by customs agents for over a decade. Eventually, Gates and others worked to craft legal exemptions that would allow the 959 (and other interesting vehicles) to get onto American shores, and it’s said that you can still occasionally catch him riding around Washington in his ultra-rare exotic to this day.

Looking back on how the 959 has aged among its peers, it’s hard to fault him for the dedication.

Today, even run-of-the-mill Porsche 911s — the kind you don’t need to be a billionaire to buy — have all-wheel drive, electronic dampening, anti-lock brakes, and 6-speed manual transmissions (in fact, they’ve moved up to seven gears now). But it was this gloriously over-engineered Porsche of the 1980s, the 959, that set the stage. And it happened three decades ago.