LinkedIn has become the default online resume, but now it’s hoping to take over the address book on your phone. The company has just announced LinkedIn Contacts, a new iPhone app and web tool that takes the messages, contacts, and events that you have strewn across a myriad of accounts and turns them into histories between you and everyone that you've ever connected with online. The app is LinkedIn's big play to integrate into your contacts list, and it's doing it by building a brand new one — one that the company says is always up to date and is more detailed than just about anything else out there. It’ll also help you stay in touch and maintain good relations, making Contacts a sort of modern Rolodex and personal secretary.

A history of every email, meeting, and more

For each of your contacts, LinkedIn puts together a history of every time that you've talked to one another, from emails, to meetings, to how you met in the first place. The service collects all of this by tapping into what you’re already using: Gmail, Yahoo Mail, Outlook, and to a smaller extent apps including Evernote and CardMunch. But critically, LinkedIn's new service doesn't tap into Facebook or Twitter, and it probably won't anytime soon.

Using the data gathered from these less-social services, Contacts will display the details of events and the subject lines of emails that relate to the person you're looking up. On the desktop, these connections display as a minimalist timeline that's not unlike a barebones version of Facebook's friendship pages, and it will appear near the top of each LinkedIn profile that you visit. In the app, the connections appear as a list of items below a digital business card, which contains basic info and a way to message or call that contact. 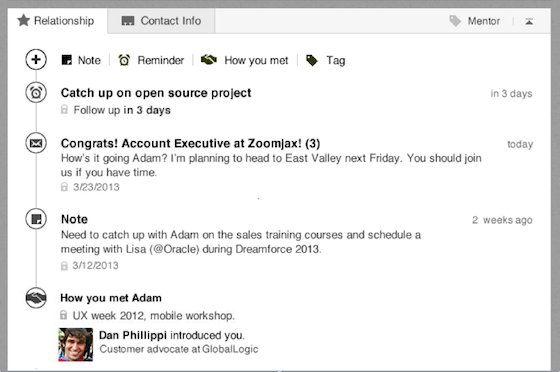 But the company's intent isn't only to explain your relationships: it's to show you how to keep those relationship up. Every morning before you get out of bed, LinkedIn wants to slip an email into your inbox that suggests who you could congratulate on a promotion, wish a happy birthday, or schedule time to catch up with. You can even have it remind you about who you should stay in touch with — or kiss up to. It'll display this all online and in the app as well, the latter of which actually presents the connections as "To Do" items to be accomplished, complete with a bright orange badge.

The app even goes so far as to automate messages. This ranges from the eloquent "Congratulations!" to the almost-natural "Hi Ryan, I'm traveling to New York, New York between 4/26 and 4/30. Have any time to meet up?"

With Contacts, LinkedIn is entering into a field that plenty of startups have been vying to take over. Apps like Hashable, Brewster, Smartr, and Evernote Hello have all tried to tap into the holy grail of social networks: your mobile phone contacts. Because its building on top of LinkedIn, Contacts may immediately stand ahead of the pack, but its features come off as nothing more than a roundup of the selling points already debuted by enhanced address book apps and certain smartphones.

There's no fun factor to be found

In fact, Contacts came from the work of a startup called Connected, which LinkedIn purchased in October of 2011. Connected’s founder, Sachin Rekhi, is still helming the project. Though it’s debuting today, Contacts will only be available to a small number of US users at launch, and additional users will be added in the weeks to come. An Android app and support for LinkedIn's mobile site are the next steps for the service, but there's no word about a launch on other platforms.

Rekhi told us that with Contacts, "We've made it truly effortless to stay in touch" — but he doesn't mean with friends and family. Rekhi said that Facebook and Twitter integration isn't something that LinkedIn is currently looking into. This distinction helps to bring into focus what the company is trying to do here: there's no fun factor, but like LinkedIn, it might become something the average businessperson feels they can’t do without.