Kindle TV: why does Amazon need a set-top box?

Kindle TV: why does Amazon need a set-top box?

With competitors swarming the biggest screen in the house, Amazon makes a move of its own

News that Amazon is building a set-top box to rival offerings from Apple, Google, and Roku arrived yesterday as a surprise — but not a shock. In the past several years, all of its biggest competitors have made their own plays for customers' living rooms. The simplest explanation for Amazon's entry into the set-top box space is that the company has to.

Amazon declined to comment, but consider the competition: Apple has its TV "hobby," which sold 5 million units last year. Google has its bewildering array of TV devices and hardware partnerships. Nintendo, Microsoft, and Sony have their consoles, with the latter two expected to release next-generation models in the coming months. Even Roku, a relatively tiny maker of set-top boxes, has managed to ship 5 million units since releasing its first streaming box in 2008.

Among its major streaming-content peers, only Netflix has so far resisted the urge to build hardware of its own.

It's all about the ecosystem

As the living room's would-be conquerors have multiplied, so too have Amazon's video ambitions. From its humble beginnings as a service called "Unbox," Amazon Instant Video has grown to offer more than 140,000 titles for rental or purchase, including new-release movies and TV episodes. Subscribers to the $79-a-year Amazon Prime service can watch thousands of TV shows and movies at no additional charge.

Meanwhile, the company has moved aggressively into original programming, recently unveiling 14 pilots and asking viewers to help decide which shows are greenlit. (Amazon says the pilots were the most-watched shows on the service over the weekend, with generally positive feedback from viewers. Critics have been less kind.)

Until now, Amazon has been content to let Instant Video exist as an app on phones, tablets, set-top boxes and consoles. But there are drawbacks to relying on competitors to build your hardware for you. Chief among them: customers get drawn into competing ecosystems of devices, content and services, at a time when Amazon is rapidly building out an ecosystem of its own.

Android and iOS are the most widely used software ecosystems, but Amazon has set them in its sights. The company has a world-class web presence, a growing library of video content, and a family of popular Kindle devices. A smartphone is rumored to be under development as well. The living room is the missing piece.

"If you're going to do an ecosystem, you need to have an anchor in the living room."

"They see the same handwriting on the wall that Apple put up there a few years ago," said Mike McGuire, an analyst with Gartner. "If you're going to do an ecosystem, you need to have an anchor in the living room. We've seen Apple be very coy about Apple TV, but that box — as a thing that gets you onto a bigger screen, with all this content we have in various places on various devices — is going to be hugely important."

And it's not just other tech titans Amazon has to worry about. Roku has became the second most popular streaming-video box, after Apple TV, while taking an approach that is notably different than the walled-garden strategy of its far larger competitors. The $99 Roku 3, which was released to raving reviews last month, comes loaded with 750 channels and the ability to play games using an included remote control. In the long term, an approach that embraces multiple ecosystems might be the armor a small player like Roku needs to survive.

A Kindle TV — as Bloomberg suggests the device could be called — could bring Amazon many benefits. First among them: another device linked to an active credit card. When the Kindle Fire launched, many observers saw the tablet as being first and foremost a new storefront. (The writer John Siracusa memorably described it as "a magical, colorful window through which you can give money to Amazon.") 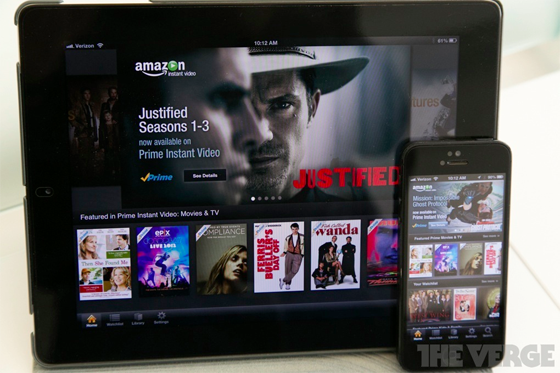 Kindle TV presents a similar opportunity. An estimated 10 million people already subscribe to Amazon Prime, the other benefits of which include free two-day shipping on millions of items and one book rental per month. Amazon cares about Prime because it encompasses Amazon's power users — Prime subscribers spend significantly more than other Amazon customers. Increasing the amount of video on the platform — and, through Kindle TV, the number of places where customers can see it — represents a powerful opportunity to lure new subscribers. (That's one reason that a trial subscription to Prime is likely to come with purchase.)

And who's to say the Kindle TV will stop at traditional video? McGuire notes that Amazon could bring Home Shopping Network-style content to the device, giving the company one more channel through which to sell its merchandise.

"Not only is it serving the company's current and future needs of becoming a content ecosystem — by the way, it can really support the existing business," McGuire said. "Buying a big-ticket item on Amazon? It might be better to see it on a bigger screen. Maybe watch some video. This might support the commerce stuff they already do."

None of this is to suggest that the Kindle TV is a guaranteed hit. Many of its competitors are well established in the marketplace, and it's unclear how Amazon will differentiate its set-top box from its peers — Amazon Instant Video will likely continue to be available on other devices. And a set-top box is a rare item on which the company could have trouble undercutting a competitor on price; a new Roku can already be had for as little as $50. But given what's at stake, there's little doubt as to why Amazon would want to build a box of its own. The only question is why it took so long.