Origins, unknown: where did the Maya empire really come from?

Origins, unknown: where did the Maya empire really come from?

After a seven-year excavation, a new theory emerges

The astronomy, calendar, and apocalyptic predictions have been well documented, but there's one part of Maya history that researchers have yet to agree upon: how the ancient civilization actually came to be.

For years, Maya researchers have adhered to one of two theories. Some argue that the pre-Columbian culture developed virtually on its own and free of influence; others believe it was a direct offshoot from the older Olmec civilization — a group that emerged about 3,600 years ago in what’s now the southern Gulf region of Mexico.

But Drs. Takeshi Inomata and Daniela Triadan, husband-and-wife anthropologists from the University of Arizona, believe neither theory is totally accurate. In a study published today in the journal Science, the researchers claim that the Maya likely developed under the influence of not just the Olmec, but an array of other cultures, as well.

Inomata and Triadan arrived at this conclusion after spending seven years excavating early ruins at Ceibal, an ancient Maya city located in present-day Guatemala. Anthropologists have cited the city as proof that Maya culture descended from the Olmec, pointing to similar plazas, pyramids, and ceremonial structures found in both Ceibal and nearby La Venta — a coastal city that was once the cultural hub of Olmec civilization. Previous excavations showed that Ceibal's structures were erected well after those in La Venta, lending credence to those who describe the Olmec as the Maya's true "mother culture."

According to Inomata, though, it's unlikely that the Olmec gave direct rise to their regional successors. Using radiocarbon dating, he and his team found that Ceibal's earliest structures predate La Venta by as many as 200 years, suggesting that the Olmec settlement could not have been the primary influence on Ceibal. 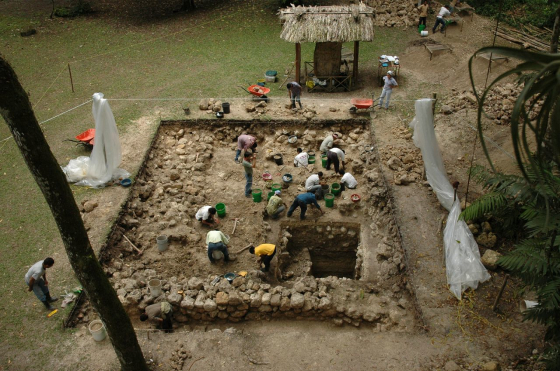 As Inomata points out, this evidence doesn't mean that the Maya predate the Olmec, or that their civilization arose within a cultural bubble. In fact, the ceremonial structures he uncovered at Ceibal bear a remarkable resemblance to those from La Venta. The centers of each city were laid out in near-identical fashion; both were oriented northward with the same array of pyramids, platforms, and a central plaza. Inomata also uncovered jade and other precious stones at Ceibal, suggesting that both groups performed similar ritual sacrifices.

The most likely explanation, Inomata said, is that Mayan culture developed as part of a broader social movement that unfurled across Mesoamerica — a region extending from central Mexico to Central America — between the years 1500 and 800 BC.

"There’s no such thing as 'Maya' or 'Olmec’ as one solid cultural block," Inomata said in an interview with The Verge. "Instead, it's these cultural interactions among various groups that were most important" in giving rise to the Maya. According to the researcher, these groups likely included early civilizations living along Mexico's Pacific coast, as well as those who settled in present-day Chiapas, a Mexican state that borders Guatemala. For the Mayans, he says, "There was not just one origin."

The cause of this social shift remains less clear. Inomata speculates that it may have something to do with the rise of maize-based agriculture, which likely created new social structures, or perhaps some sort of political upheaval within the Olmec civilization. The city of San Lorenzo was the Olmec cultural center before La Venta, and this transition — and its resultant power vacuum — may have triggered larger shifts throughout the region.

"This is not just a study about this specific civilization."

It's also unclear whether Inomata's study will have broader implications for what scientists currently know about the Mayan culture and belief system. Ceibal predates the emergence of both the Maya calendar and system of writing, but in a press conference held Thursday, Inomata acknowledged that the ceremonial structures his team uncovered suggest that earlier Mayans performed rituals similar to those of their predecessors. Whether or not these rituals were predicated upon a calendar system remains unknown.

Ultimately, though, Inomata's findings pose questions that extend well beyond the the Maya.

"This is not just a study about this specific civilization," Inomata told reporters. "We also want to think about how human society changed, and how human civilization developed."

"What we have seen here is that major renovation and change can happen through the interaction of various groups. It doesn’t have to come from powerful political centers."