LIL BUB IS HISSING AT A LION

As much as I love the vague category that is “internet culture,” most of it was born to die. The memes get stale, the blogs taper off, the videos that were once hypnotic become insufferable. But Lil Bub, the permanent kitten who has attracted a massive internet following over the past year, will live forever in a documentary. Lil Bub & Friendz is a definitive take on internet cat fandom, a love letter to anyone who’s stayed up late browsing YouTube for kittens falling down slides or riding Roombas. Maybe, though, a love letter is the last thing we really need.

Lil Bub is so cute as to be mildly unsettling — a tiny cat with a protruding tongue and stubby legs, she’s an uncanny combination of virtually every trait we associate with adorable baby animals. When Bub’s owner Mike Bridavsky carried her into the theater at Tribeca, there was a collective gasp, an instinctive response to look into her giant eyes. Put her in a movie and fill the remainder with the cream of YouTube’s cat crop, and you’ve shut down any attempt at rational thought. How could anyone possibly dislike this? I thought while watching a cat sociologist wearing a cat shirt talk about YouTube cat videos while a nearby cat burrowed into a bag of treats. A mother cat is hugging a baby kitten. Grumpy Cat is rolling around on the carpet. Lil Bub is hissing at a lion. LIL BUB IS HISSING AT A LION.

The movie is about giving these rock stars a mythology

The Vice Media-produced Lil Bub & Friendz moves quickly through a vast swath of material. Though they nominally follow the life of Bub and her owner, documentarians Andy Capper and Juliette Eisner often cut away to tangentially related segments. They touch on a few of the efforts to take internet culture offline, from those of “meme manager” Ben Lashes to an Internet Cat Video Film Festival held in Minneapolis, and famous felines like Grumpy Cat or Nyan Cat get quick profiles. There are a few nods to cat videos as a social phenomenon, including conversations with an “expert” and discussions with fans. Generally speaking, it’s a profile of what the filmmakers consider “the new rock stars,” the memetic icons whose images proliferate endlessly online, as accidental success either fades away or turns into a concerted publicity effort. Bub’s promoter also manages indie rockers like Sufjan Stevens and Xiu Xiu, and she apparently moves more T-shirts than any of them.

At its core, the movie is about giving these rock stars a mythology. Along with the film’s YouTube footage and taped interviews, Lil Bub appears in her own miniature music videos, descending from space or presiding over a fiery hellscape to the strains of heavy metal. In more traditional documentary segments, she makes appearances to an adoring public, or visits a wildlife shelter to make a donation — hence the lion. Where musicians have tormented pasts or addictions to fuel their work, Bub has something arguably much sadder: she’s kittenish precisely because of a plethora of deformities, from a shortened, toothless jaw that leaves her tongue perpetually visible to twisted legs that make it almost impossible for her to walk. While she appears surprisingly fit, Bridavsky recounts periodic health problems that make her future seem grim: the film’s tone is hopeful, but it still implies things could get much worse down the line. 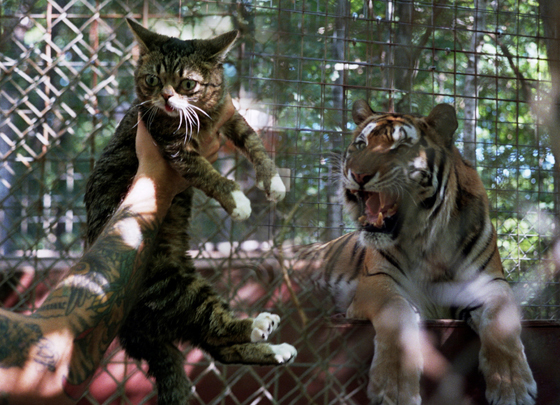 It’s easy to wonder if Bub was bred for helpless cuteness, but her deformities are apparently accidental: she was the runt of a rescued litter, and it’s a bit hard to argue that she’s being hurt by her internet fame. Bub seems to have about the best life a cat in her position could wish for, and Bridavsky says her income helped lift him out of financial woes that almost certainly would have hurt her quality of life. That said, I can’t help but feel like I’m enjoying an animal’s suffering, even if there’s really no way to make it better.

Bridavsky himself appears genuinely inseparable from Bub — he took to Tumblr after the Tribeca premiere, posting health updates to reassure fans. Bub owes much of her success to heavy exposure in BuzzFeed, Vice, and others, and she’s been heavily promoted, but her early fame seems due more to luck than a concerted effort by Bridavsky. Everyone featured in the documentary, including some who are described with the frighteningly cynical term “cat entrepreneur,” seem driven mostly by the simple urge to share their adorable pets with others. They’re selling a thing that brings people real enjoyment, even if it’s unclear how much anybody really makes from it. As I left the theater, though, I realized I was somehow very sad.

I’m not worried about viral videos “selling out.” But there’s something depressing about seeing the fundamentally ephemeral world of memes pinned down like a butterfly collection, or about turning momentary fads into massive aggrandizing narratives and endless promotions. During my many wasted hours in college, I used to scroll through 4chan’s /b/ board, watching ideas pop up, flourish for a few minutes or hours, and die, never to be seen again. It was lovely. Does everything new and interesting need to be made permanent, to evolve into a media empire? Even the rock star metaphor is worrying: I don’t want a Lil Bub / Grumpy Cat supergroup to be releasing compilation albums in ten years.