A judge presiding over a legal battle between Microsoft and Google-owned Motorola issued a ruling today that valued elements of Motorola's patent portfolio far below what the company felt they were worth — by a difference of over $3.9 billion a year.

The two companies have been locked in a legal battle over Microsoft's use of several Motorola patents that are part of the 802.11 Wi-Fi and H.264 video standards. As such, they're considered standards-essential patents, and must be licensed to other parties at a reasonable and non-discriminatory (RAND) rate. According to Redmond's attorneys, Motorola violated that pact by asking far too much to use the patents in question — its initial request was 2.25 percent of the price of each product using the patents (the Xbox 360 and any computer running Windows 7 were just two specific examples named). All told, the total in licensing costs could have run more than $4 billion per year.

Motorola wanted 2.25 percent of the price of every PC running Windows 7

Given that negotiations are common, Judge James Robart had to determine both what the royalty rate for the patents should be in this case, and what a reasonable range would be (it wouldn't be uncommon for someone to start with a higher number and then negotiate downward, for example). To do so, a bench trial was held in November during which the court heard testimony from 18 witness.

According to today's filing, the court's final determination is that the appropriate RAND royalty rate for Motorola's H.264 standards-essential patents was 0.555 cents for each end product sold, while a reasonable range would stretch up to 16.389 cents. For the 802.11 patents, the court decided that 3.471 cents per unit was the proper rate for Xbox products, while all other involved devices would come in at 0.8 cents per unit (the upper limit for a reasonable ask in this case was 19.5 cents). 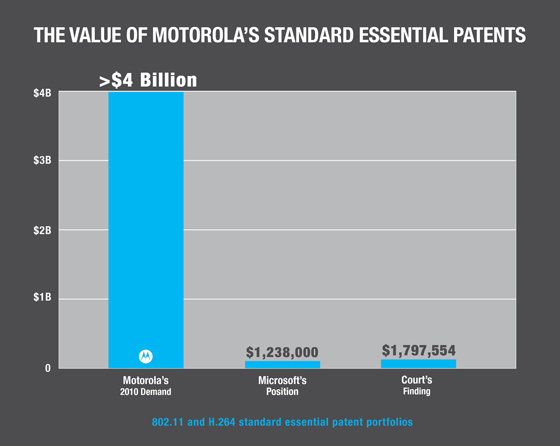 The new figures place the value of the combined patent portfolios far below the $4 billion a year the initially-proposed royalty rate would have garnered; all told, the court's new figures result in just under $1.8 million in yearly royalties. While still a huge drop, that number is more than half a million dollars per year more than what Microsoft had said appropriate royalty rates were.

In response to the ruling, Microsoft corporate vice president and deputy general counsel David Howard said in a statement that "This decision is good for consumers because it ensures patented technology committed to standards remains affordable for everyone."