The robots are coming, but will we love them?

The robots are coming, but will we love them?

Recent studies blur the lines between man, machine, and emotion

Would you shed a tear if a robot was being tortured before your eyes? According to Astrid Rosenthal-von der Pütten, you just might.

Rosenthal-von der Pütten is a researcher at the University of Duisburg-Essen in Germany, and the author of two recent studies on how humans empathize with machines. Using functional magnetic resonance imaging (fMRI) to measure subjects’ brain activity, she and her colleagues found that participants felt a sense of empathy when seeing a robot subjected to both torture and affection. In some cases, they appeared to treat the onscreen animatron as if it were a human.

Rosenthal-von der Pütten says her research was inspired by recent trends in robotic assisted living. Robots have played an increasingly large role in Japanese households, for instance, where both humanoids and animatronic pets serve as companions for the elderly. Manufacturers have also begun designing more empathetic androids, though few studies have examined how humans emotionally respond to this technology.

A tale of love and torture

"Previous studies did not concentrate on the specific emotional reactions of humans to robots," Rosenthal-von der Pütten said in an interview with The Verge. "They didn't really ask people how they were feeling, or apply objective measures of emotional reactions."

In Rosenthal-von der Pütten's first study, published last year in the International Journal of Social Robotics, subjects watched two short videos involving the Pleo — a small robotic dinosaur made by the now-defunct Ugobe. In one clip, the dinosaur was treated with affection, as an anonymous human hand caressed its neck and body. Each stroke drew purrs of pleasure from the robot, its tail wagging with puppy-like alacrity.

Things took a turn for the grotesque in the second video, as the same hand that had treated the Pleo so tenderly suddenly subjected the dinosaur to a barrage of physical abuse. The robot's head was wrapped in plastic, its body was repeatedly battered, and its neck was strangled with a makeshift noose. The Pleo flailed its limbs helplessly throughout the one-minute clip, roaring and writhing in agony. There was no simulated blood or gore, though the contrast was clear: less Land Before Time, more Pleo Dark Thirty.

After watching each video, the 40 subjects reported feeling significantly stronger negative emotions during the torture clip. Researchers also used sensors to measure each subject's skin conductance levels — a gauge of agitation during emotionally stressful situations — and found that viewers exhibited stronger signs of distress while seeing the Pleo being pummeled.

These findings confirmed Rosenthal-von der Pütten's hypothesis that subjects would react with anger and pity to the torture video, as opposed to treating each video with apathy. Such differentiation suggests that humans feel at least some empathy toward lifeless animatrons, but her forthcoming follow-up study addresses far more intriguing questions: how would subjects react when watching both robots and humans subjected to torture, and how would their reactions compare?

To test this, Rosenthal-von der Pütten and her team exposed a different set of participants to the same two Pleo videos, as well as two clips of an anonymous woman being subjected to identical levels of torture and tenderness: a plastic bag and noose in one, demonstrations of warmth and care in the other. (An inanimate green box was treated in the same way, serving as a control measure.)

This time around, researchers again gauged the subjects' reactions with fMRI scans, paying particularly close attention to neural activity in the amygdala — the part of the brain responsible for processing emotion. These scans show that subjects felt stronger emotions when they saw the woman tortured, though they exhibited similar brain activity when they watched both humans and robots being treated with affection.

This would suggest, then, that people identify with robots in the same way they do other humans — though there are important caveats to consider. As Rosenthal-von der Pütten notes in her findings, subjects exhibited no significant differences in brain activity when watching either experimental or control videos. Ostensibly, this implies that participants perceived box torture no differently from human or robot abuse, but Rosenthal-von der Pütten speculates that this finding might have to do with flaws in the research protocol itself.

One subject, for example, said she felt a sense of sympathy during the violent box video because the torturer seemed to hurt her hand while hitting the object. (For future studies, Rosenthal-von der Pütten said she'll likely replace the human torturer with a disembodied hammer, in order to avoid similar interference.) Still, the researcher emphasizes that her primary focus was the comparison between human and robot interactions, adding that the fMRI scans were supplemented with survey feedback from the participants. 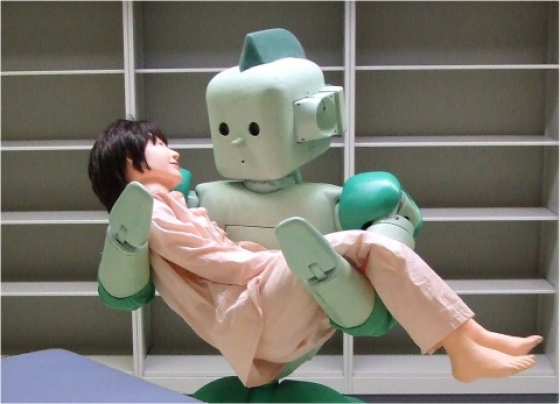 It's also hard to say how much could be extrapolated from these results, since Rosenthal-von der Pütten's study only examined initial responses to on-screen stimuli. It remains unclear whether this early sense of empathy would evolve into a deeper emotional bond over an extended period, or whether her results would change if the Pleo had been directly in front of them, rather than on video.

Equally uncertain is whether subjects would have the same feelings about more human-like robots. The author says she chose the Pleo because it was relatively inexpensive, and because of its lifelike coos and tag wails. But would people respond in a similar fashion to more human-like robots — or, for that matter, a standard stuffed animal?

"The robots will come."

Rosenthal-von der Pütten acknowledges that there's still plenty of work to do in this area, and she plans to expand upon her research after presenting her latest findings at a London conference this June. Her next step is to examine how people respond to seeing a robot being verbally abused.

The idea, she says, is to offer both researchers and manufacturers greater insight into how humans respond to robotic companions, in the hopes that her work may better inform the design and function of future models.

And as inconclusive as the field may be right now, she remains convinced that robots will soon play a significant, and increasingly intimate, role in our everyday lives.

"The robots will come," she said. "That’s not a question."