‘Byzantium’ review: do we really need another vampire movie?

Share All sharing options for: ‘Byzantium’ review: do we really need another vampire movie?

As a concept, vampires are wearing thin. Twilight and its attendant social phenomenon all but destroyed the creature’s mysterious charm — whatever you think of the books, it’s become impossible to avoid jokes about sparkling vampires playing baseball. But 20 years after his seminal Interview with the Vampire, filmmaker Neil Jordan has returned with the quieter Byzantium, based on a play by Moira Buffini. It’s hardly a retread of Interview or a by-the-numbers horror film, but it fails to answer the basic and required question: why do we need another vampire movie?

While Interview swept across centuries and continents with a cast of forceful characters, Byzantium takes place mostly in a single English city, following the lives of former teen prostitute Clara (Gemma Arterton) and her orphanage-raised daughter Eleanor (Saoirse Ronan). Both are vampires or "sucreants," made not through a bite but on a mysterious island with a stone hut that can bestow immortality on visitors.

The film alternates between their present — where they drift through towns, hunted by a mysterious group of fellow vampires — and the events that led to their transformation two centuries ago. Clara earns money as an intermittent exotic dancer or brothel madam, while Eleanor writes and discards the story of her life over and over, struggling to find someone she can trust to share it with. Eventually she befriends Frank, a teenage boy with leukemia, and their relationship predictably threatens to break the bond between Eleanor and Clara.

There are a number of undeniably beautiful moments — particularly the transformation scenes themselves, set against the rocky desolation of the island. While the characters speak in that stilted voice that’s meant to indicate they’re from the past, Arterton and Ronan have real chemistry as a frustrated and isolated mother and daughter — and Jonny Lee Miller sneers and spits entertainingly as Ruthven, the syphilitic villain who forces Clara into prostitution. Plot-wise, though, the film falls down when it attempts to build a lore behind its vampires.

They can pass almost flawlessly as human, but they’ll never quite be human

The basic question of what the two protagonists are is handled well. As usual for a film about mythical creatures, Byzantium is selective about its vampire traits, but it does so in a concerted effort to make Clara and Eleanor hard to distinguish from ordinary people. Sunlight has no effect, and they have neither otherworldly grace nor pointy teeth. Besides unusual strength and resilience, the only real tell that the pair are vampires — as opposed to deluded killers who believe they’re hundreds of years old — is a single sharp, hard thumbnail that grows when they’re about to feed, taking the place of fangs. They can pass almost flawlessly as human, but they’ll never quite be human. 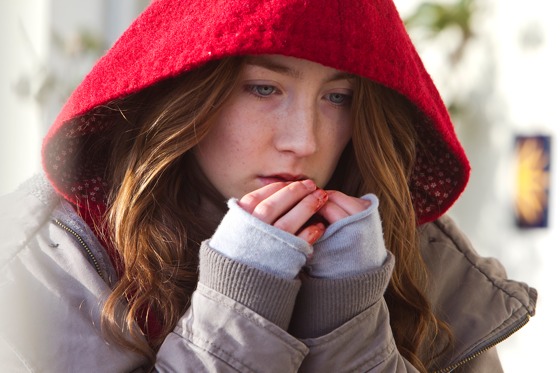 It’s disappointing that the movie doesn’t play up this ambiguity further, especially as Eleanor starts trying to reveal her secret to others, because it’s Byzantium’s only really interesting contribution to the vampire mythos. We’ve had several takes on the pain of murder-fueled immortality — including Interview with the Vampire — and on vampires as wish fulfillment, but Clara and Eleanor are relatively normal humans who simply do not change. Eleanor describes herself as existing outside time, an apt description: the two seem frozen in place, doomed to live for hundreds of years without ever escaping who they were as teenagers. When they out themselves as vampires, people don’t even believe them.

The flip side of this is that Clara and Eleanor also come off as shallow and one-dimensional. Each has a sort of guiding code to her vampirism: Clara wants to punish men who exploit their power, while Eleanor gives peace to the nearly dead. But it’s a fine line between archetype and stereotype, and the two are at times a walking virgin / whore complex. Clara is meant to come off as a pragmatic woman who doesn’t know any life but sex work, but the camera’s constant focus on her body turns her into just another object and the movie into just another story about vampire strippers. On a broader scale, there’s an ugliness in seeing yet another example of female characters being overwhelmingly defined by their sexuality.

Even this, though, is better than the attempt to introduce a brotherhood of vampires whose "pointed nails of justice" seem used exclusively to hunt down Clara and Eleanor for the crime of being female vampires. It’s not really clear why they exist, and though the film tries to set up a sympathetic relationship between Clara and one of their hunters, it falls flat — in part because he’s spent the rest of the movie turning a blind eye to how badly everyone else has treated her. The brotherhood’s presence pushes Byzantium into a shaky middle ground between tragedy and action movie. While it’s fairly fast-paced and has its share of well-constructed fights and chases, these don’t quite fit with what feels overall like an attempt to give vampires a semi-realistic, or at least solidly dramatic, treatment.

Byzantium is a vampire movie that might actually have worked better without the vampires. Without a series of tired associations to invoke, the filmmakers could have created a new background for their ideas, breaking free from horror cliche. I’m putting out a call right now: somebody, make me a movie about immortal teenagers who don’t drink blood. And maybe leave out the strippers this time around.