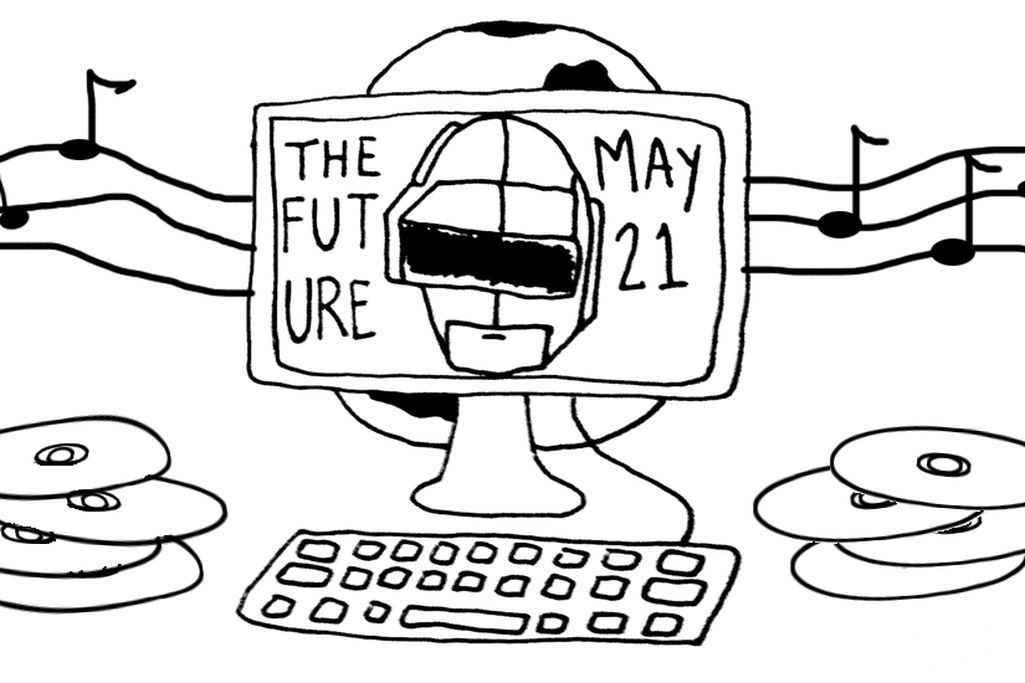 If you are old enough think back to a time before Napster, before music taxonomy became a full-time job for hashtaggers and your record store had only four categories to guide your music discovery: rock / pop, hip hop / R&B, classical, and country. You were dialing into local BBS’s at 28.8k tops and WAVs and MODs and MIDs were the only music your Packard Bell understood, so album release dates really really meant something: maybe, like me, you had your dad drive you to Best Buy at midnight on December 6, 1994 to pick up Pearl Jam’s Vitalogy CD, which was packaged to mimic the feeling of a vinyl sleeve, and came out two weeks after the vinyl release, which is the reason you saved up for months and bought and still own a turntable. It’s not that you long for these retail days of yore — that would make you categorically old — but you grew up in them amongst Claire Danes posters and Tabitha Soren news updates and Walkmen and Discmen and maybe Minidiscmen. You would load your boombox with a cassette and wait with your finger on the record and play buttons all night long to hear that one song because that was the only way you were going to hear it again of your own volition. Maybe you mowed lawns all summer a few years later to save up for a hideous HP external SCSI 2x CD burner and could fill a trash bag with the unreadable discs (a dollar each!!!) that the Nero burning software would produce nine times out of ten, and maybe you wore out that tenth disc in your Discman because it made you feel invincible to be able to make compact discs, and you definitely remember the first time a spoiled homeboy showed up to school with a 32MB portable MP3 player because now you were not only invincible but essentially omnipotent. 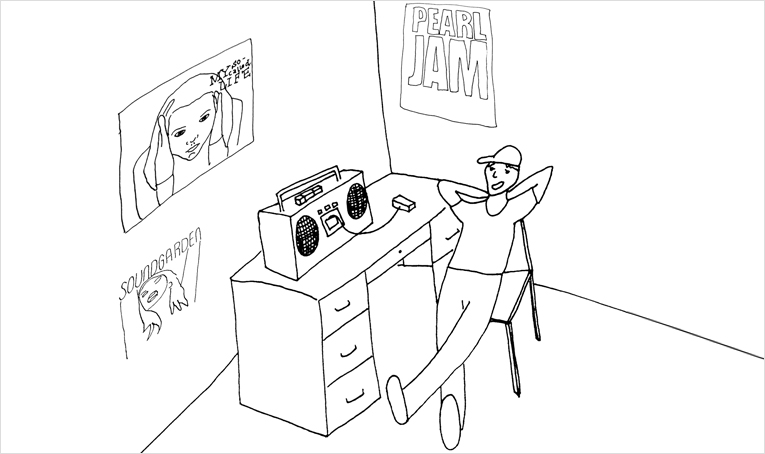 Maybe now you are old, but are trying to convince yourself that your best years are still ahead of you. Your Claire Danes poster is still there but it’s Carrie instead of Angela. Your ultra-high-definition media sits on a 6TB NAS that you can access anywhere in the world instantly and you didn’t have to mow any lawns to afford it. The MP3 / WMA-capable in-dash CD player you have in the car doesn’t emote much but if it could you’re pretty sure it would be frowning spitefully at the AUX input below, and let’s not go into details but your music discovery process is long and nuanced and has more to do with Shazam than cassettes.

One quintessential hallmark of getting old is feeling like the kids have it too dang easy these days: free music is pushed upon us at every juncture from Starbucks to Spotify and white earbuds have displaced most of the magic of being able to listen to music on the go or the heartache of a favorite disc slowly succumbing to the abrasive forces of constant use. And things generally sound better: Neil Young and his ilk would have us believe the very soul of music has been lost in the popular transcoding rituals of 2013, but I don’t think Neil has stopped to think that even the lowliest Coby headset from a modern drugstore checkout lane might feel like something from the Audiophile magazine amidst the the standard black foam-clad reproduction technology of the early ‘90s. 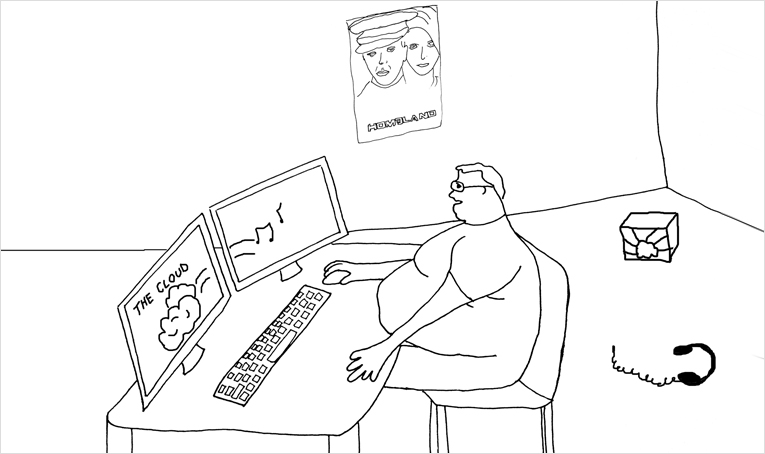 And then there’s the aura of mystery surrounding our rock idols, mere humans propelled to godlike status through the raw power of rock and roll that we could only hear from through the dead-tree ancestors of Pitchfork and The Daily Swarm. That elevation was dealt a devastating blow in the early 2000s by The Osbournes and left for dead in the sea of Twitter diarrhea tapped out by Lil B in the early ‘010s (which was put on Time magazine’s bizarre list of the best Twitter feeds of 2013 last week). One only needs to wade through a Friday night on Rihanna’s Instagram to see that, no matter how rich and famous these people are, they are still just...people. The only pop entity that hasn’t resorted to the self-obsessed promotions of our age is a pair of French DJ’s that became robots during a freak studio accident in 2001.

Daft Punk’s outlandish creation myth seemed like a silly plot a dozen years ago but as it aged the story became increasingly nuanced — their Alive 2007 tour didn’t ride on the coattails of any album release, but served the defining expression of a breed of singularity that’s already landed on Earth. And it was all wrapped up in the most amazing pyramid that any human or robot has ever built.

A funny thing has happened in the evolution of the Daft Mythology: their deep gaze into the future is always complemented by an equally intense investigation of the past. Thomas Bangalter came forward as a human to discuss the group’s recording of a 90-piece orchestra for the Tron: Legacy soundtrack in 2010: “Synths are a very low level of artificial intelligence. Whereas you have a Stradivarius that will live for a thousand years...[this is the] idea of the ultimate retro-futurism.” These words, as well as some disappointing rumours about their elitist studio demeanor, struck me as elitist blather when I heard them then. But Daft Punk’s greatest ideas sometimes take years to sink into the minds of lowly humans like myself. It all clicked into place just a few weeks ago when I saw this: 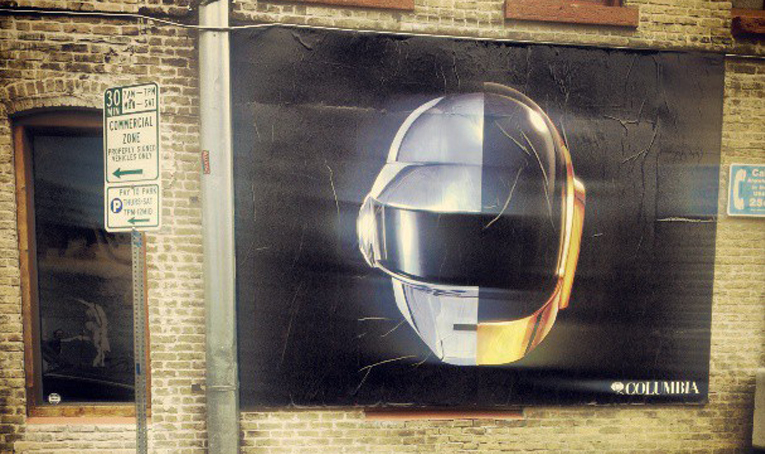 When news got out a few months ago that Daft Punk had migrated from EMI to Columbia a strange alarm went off in my head: while this was most importantly an indication that new material would arrive imminently, it also gave me this foreign feeling: “Why the fuck do I care that Daft Punk has changed labels?” It wasn’t like Fugazi was signing a three-album deal with Epitaph or something; in any other case I’d see this as a simple business transaction between businessmen. It’s been a looooooong-ass time since any of the majors have successfully foregrounded themselves as champions of a particular strain or quality of music. Columbia Records: the name itself sounds old; the logo hasn’t changed since 1954, and I challenge any tween out there to name any of the artists on its roster (even though it includes One Direction, Beyoncé, and MGMT). When was the last time you saw an artist and a major record label given equal consideration in an advertisement?

It feels to me like Columbia is asserting itself now not just for the success of Random Access Memories when it arrives on May 21st, but to save the very concept of the major label itself. Although it’s hard to see past its extremes of greed and anachronism throughout the dawn of filesharing, the art of big-budget record releases is something I realize I miss profoundly, and I think Daft Punk’s new album will be just as much as an expression of retro-futurism for Columbia as it is for the band itself.

Record labels do, of course, promote themselves in 2013 — there are a series of smallish billboards in Silver Lake and Williamsburg that are perennially occupied by Beggars Group — but there’s definitely something about the recent ads during SNL that places Columbia definitively on the monied end of the divide between “major” and “independent.”


“We are still rich,” whispers Columbia between the lines, “and still classy.”

The old guard at Columbia, if they’ve been allowed to keep their corner offices away from douchey 20-something A&R assholes, remember the times when they were the people who created unilateral moments in the world via the brute force of marketing: if you think Fleetwood Mac and Jimi Hendrix rose to the top by sheer talent, you’d only be half-right. That doesn’t tend to play well in a media atmosphere that lends as much credence to zero-budget “Harlem Shake” YouTubes as it does to million-dollar Rihanna productions. In Daft Punk they have landed something of a hybrid: while their late-’90s videos were successful on their own artistic merit, they received a viral infusion to the tune of 55 million views from a bored fan armed only with a shitty webcam and a Sharpie:


Before the Harlem Shake, before Carly Rae, before Psy, there were only Daft Hands 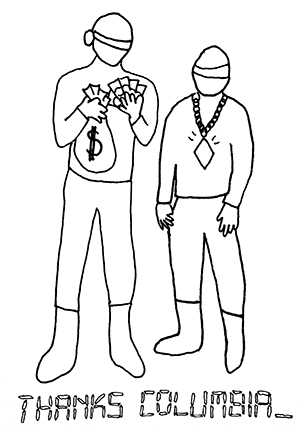 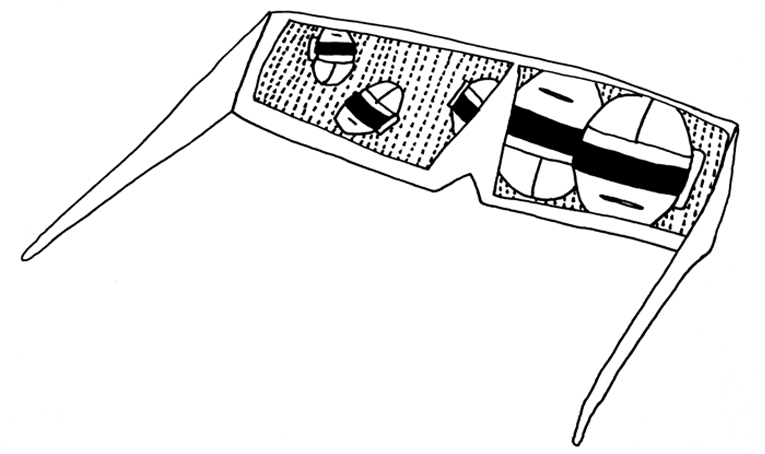 Part of the reason Daft Punk have steered clear of the cheap thrills of social media is that they have expensive taste. They seem to realize, in a timelessly French way, that their ideas are simply too big to be constrained by the shackles of a limited budget. And so they wait. And wait, and wait, until they are approached with an offer that matches the scale of their vision. The waiting has the synergistic effect of generating a hunger in their rabid fan base that can only be sated by an appropriately thrilling exhibition of Daftness. In their first chapter we waited four years between Homework and Discovery, another two years for the its feature-length anime companion Interstella 5555. The second chapter began with the artsy-fartsy Human After All LP and Electroma film, both precursors to the Alive 2007 tour that elevated their impressionistic endeavors into a pop-culture phenomenon: the pulsating pyramid created a new paradigm of arena rock that’s still imitated years later by the current electronic champions, Deadmau5 and Skrillex. The third chapter was the Disney-sponsored Tron: Legacy project that found the duo in the midst of the very storyline that inspired their entire oeuvre.

And now we find ourselves at the dawn of a new chapter with Random Access Memories. Cute title, right? It could almost seem like an afterthought lost in the French-English translation, but us loyalists know better than to skim the surface like that. Daft Punk’s newest release will weigh in at 13 tracks, for a total running time of 74 minutes. If you ever owned a SCSI CD burner that number is deadly familiar to you: I can only hope those minutes will mean more to millennials than it will to those of us who waited in line for Vitalogy. My advice? Don’t hold your breath. Those memories will seem random at first, almost surely. But...wait for it. Wait for it. The drop will come soon enough, and when it does, you’ll realize the only real way to experience a Daft Punk project is in its proper context: the future.