This Angelfire page could be the first website of 15-year-old Mark Zuckerberg, aka 'Slim Shady'

This Angelfire page could be the first website of 15-year-old Mark Zuckerberg, aka 'Slim Shady'

The sleuths at Hacker News appear to have uncovered a relic from the dusty ruins of the '90s web: Mark Zuckerberg's Angelfire webpage. While we can't confirm that the site actually belongs to Facebook's Zuckerberg, the evidence is compelling: the social network magnate spells his full name out in the page's source code, and invites guests to check out his "Zuck Fader," a newer version of his "Vader Fader" color gradient tool.

If "Mark's" first profile is to be trusted, the king of social networking can be accused of ripping off more than Facebook's concept. "Hi, my name is... Slim Shady," Mark writes. "No, really, my name is Slim Shady. Just kidding, my name is Mark." Mark lives in a small town "near the massive city of New York." He's 15 years old and just finished freshman year in high school. (A quick visit to the Internet Archive confirms the Angelfire page is, indeed, from 1999 — matching Zuckerberg's age at the time.) He's trying to promote his new AOL program, The Vader Fader. "It is a decent fader," he writes. Mark would love some comments about his website, and you can email him at "themarke51@aol.com." 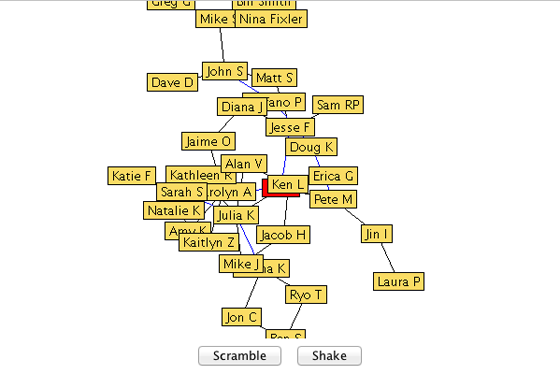 "As of now, the web is pretty small."

Beyond the inherent hilarity of seeing an Angelfire page from Mark Zuckerberg, there's some great foreshadowing of his later efforts. Take Mark's page on "The Web," which includes a Java applet linking the names of people on the web. (Mark, of course, is the red-highlighted central connection from which all others branch out.) "As of now, The Web is pretty small," Mark writes. "Hopefully, it will grow into a larger Web." You see, Mark would love to get your name on the internet. "If your name is already on The Web because someone else has chosen to be linked to you, then you may choose two additional people to be linked with," Mark writes. Of course, without a way to scrape names and photos from a campus network, Mark had to take a more diplomatic approach. "If you see someone who you know and would like to be linked with but your name is not already on The Web, then you can contact me and I will link that person to you and put you on The Web. In order for this applet to work, you must email me your name."

If you want to go deeper into the mind of Mark, he's also offered plenty of early "Likes." The best food? "Quesadillas," he writes. How about the best kid to make fun of? That'd be "Pete." And the best musician? "NOT Pete," Mark writes. Poor Pete.