With Tesla's Roadster production having drawn to a close at the end of 2011, another electric vehicle startup is picking up where it left off, announcing a different Lotus-based sports car that can do 0–60mph in the same 3.7 seconds. The company is Detroit Electric, a name under which 13,000 or so electric vehicles were sold in the early 1900s. But this time around, the team running the show is targeting the discriminating buyer, outfitting the SP:01 with a custom carbon fiber body and a $135,000 price tag. That team also happens to be headed by former Lotus Engineering Group CEO Albert Lam, which explains the reason for using the company's Exige as the car's starting point.

Should get between 150 and 180 miles on a single charge

Autoblog reports that the 2,403-pound machine can reach a top speed of 155mph and should get between 150 and 180 miles on a single charge, which is noticeably lower than a lot of the competition. When its dual 37kWh lithium-polymer batteries run out of juice, you’ll be able to get back to a full charge in about eight hours, or a little over four if you’re connected to a higher-powered 240-volt 32-amp charger. You’ll also be able to use that energy to light your house, using an optional home-charging unit, if you’re ever hit with a power outage. And of course, the car will come with its own integrated smartphone system, which will let users control everything from navigation and the music player to lighting, heating, and regenerative braking. 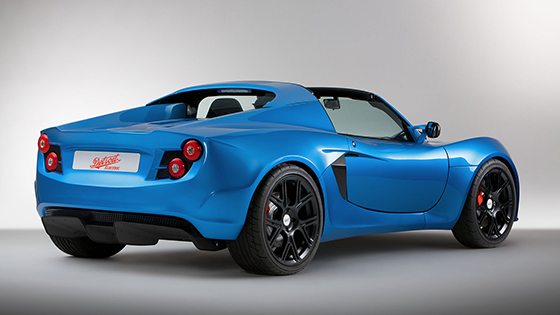 Unlike Tesla’s Roadster, the rear-wheel-drive SP:01 eschews a single-speed automatic transmission for a four-speed manual, but Detroit Electric also says that you won’t need to use the clutch either when you’re starting from a standstill or when coming to a stop. You can also opt for a two-speed automatic if you’d prefer that for some reason.

The initial SP:01 production run is going to be starting in August, and will be limited to 999 cars, but there’s more on the horizon for Detroit Electric. The company says it has an annual capacity of 2,500 cars, and is aiming to have a sub-$50,000 family sedan in production by the end fo next year.