Jawbone launches an ecosystem for Up, lets other apps tap into your fitness data

Share All sharing options for: Jawbone launches an ecosystem for Up, lets other apps tap into your fitness data

Jawbone wants users to do more with their activity data and it plans to collect even more of it in the future. The company is making two moves today to accomplish those goals: it's allowing Up fitness band data to be shared with other activity-tracking apps via a new API (Application Programming Interface), and it has acquired competitor BodyMedia.

The new API, called the Up Platform, is significant for both current Up owners and the future of Jawbone's fitness-tracking products. With it, the data that the Up app collects — steps, calories, distance traveled — is freed from Jawbone's app. Instead of being limited by what the Up app offers, the API allows apps like MyFitnessPal, LoseIt, and MapMyFitness to automatically import that data for your use. You can also have these apps send data to the Up app to supplement the information collected there.

If you're not happy with Up's sleep options, for instance, you can use clinically-proven sleep improvement program Sleepio to analyze your habits. If you're frustrated with Up's meal tracking (we find its food database is lacking), you can use MyFitnessPal, which is designed for calorie counting, and then have your calorie information imported to the Up app. It's a powerful option that makes fitness data more useful by liberating it from the particular system you buy into. (It's worth noting that the Up Platform is similar to APIs from both Nike and Fitbit.) 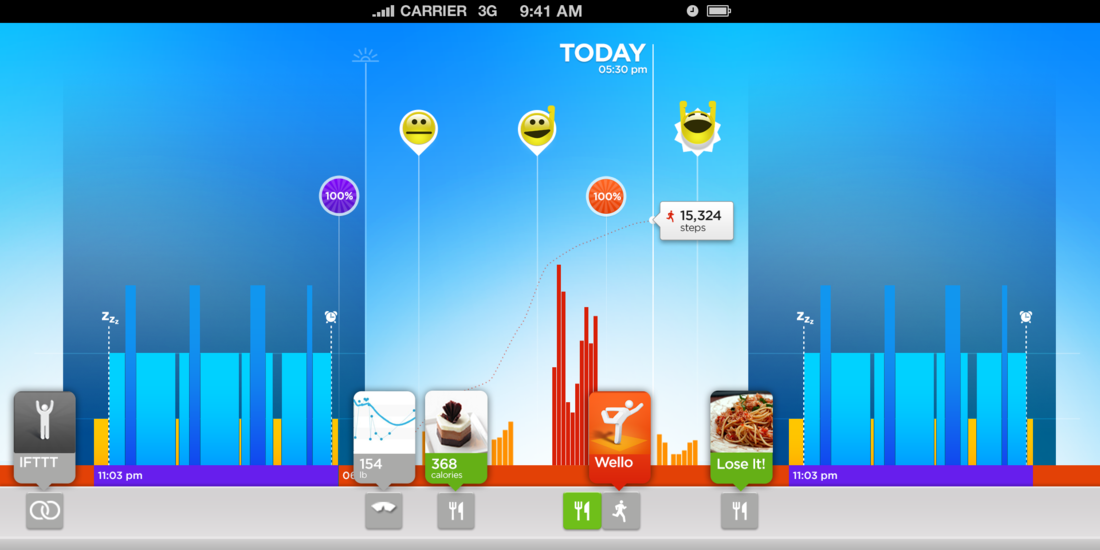 The API, which is currently closed and only available to a select group of Jawbone partners, introduces some other unique options. Jawbone, unlike competitor Fitbit, does not offer a smart scale that integrates with its fitness tracker. With today's update, however, you can use Withings' Wi-Fi scales and have your weight and other information brought into the Up app.

Even more intriguing is integration with IFTTT (If This Then That), a web service that allows you to create simple triggers to set off particular actions. (One example is to use the service to monitor Facebook for photos you're tagged in and automatically back them up to your Dropbox account.) With the Up Platform, IFTTT enables all sorts of automated fitness tracking. Jawbone suggests that users can set IFTTT to make a new meal entry in the Up app whenever you check-in to a restaurant on Foursquare, or it can send you a text message reminder if you get less than six hours of sleep on a particular night. IFTTT users can share these sorts of recipes, and we expect inventive minds will think up more useful ones in the future.

"We fundamentally think the data belongs to the user."

The second part of Jawbone's announcement today, as mentioned earlier, is that it has acquired BodyMedia. The company creates fitness trackers that compete with the Up, but its products are intended for those with a serious intention to lose weight (its products are FDA certified). BodyMedia's two current products, the $149 Link and $119 Core armbands, require $60-per-year subscriptions to a tracking service, and they gather more data than products like the Up app or Fitbit Ultra. They're said to collect 5,000 data points per minute using sensors that monitor not only your steps, but your skin temperature, sweat, and ambient temperature. A tracker that also measures heart rate is in the works. While a representative wouldn't fill us in on how or if Jawbone plans to integrate BodyMedia with the Up and future Jawbone-branded fitness trackers, he did say that the company is interested in using more sensors to gain "a deeper level of understanding" of its users' activity. For now, BodyMedia and its employees will continue to work from its Pittsburgh-based HQ. It plans to release new products, like the Core 2 armband, later this year.

Version 2.5 of the Up app, which includes support for the Up Platform API, is available now for iOS. The new version adds support for 10 services in total: IFTTT, LoseIt, Maxwell Health, MapMyFitness, MyFitnessPal, Notch, RunKeeper, Sleepio, Wello, and Withings. Jawbone plans to release an open API for other developers to use sometime in the future, and an Android version is on the way as well. Representatives couldn't give us a timeframe on the Android app update, but considering how long it took for it to first release the Up Android app, users may have a long wait ahead.