SoftBank CEO Masayoshi Son has come out swinging against the rival bid for Sprint from Dish Network. At a press conference in Tokyo, Son argued that it isn't necessary for SoftBank to raise its $20.1 billion bid for Sprint, and maintained that it represents a better option than Dish's $25.5 billion offer. While Dish has claimed that their bid is worth $7 a share, Son questioned the company's numbers, asking "Is it right? Is it true? Is it misleading? I would say the number is wrong. Totally wrong. It is incomplete and illusory."

Son is "very confident" that SoftBank offers "superior value" with its bid, despite the fact that Dish's is larger on paper. Son claims that Dish's share dilution, incremental debt, and cash outlay haven't been taken into account in the $7 figure, and in total should reduce the bid's value by 25 cents a share. A further 9 cents, Son argues, should be taken off because of the $600 million breakup fee payable to SoftBank if Sprint cancels the deal, along with $400 million in transaction expenses. 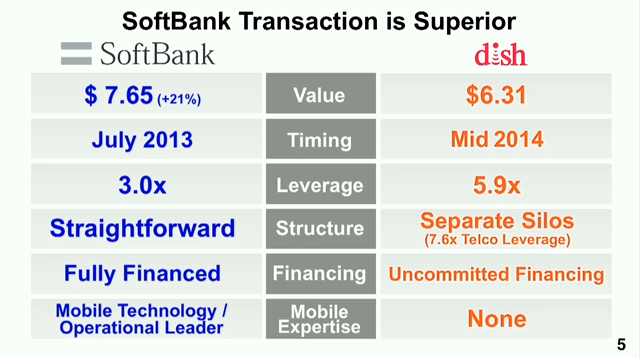 Finally, Son says that 61 cents should be taken off because Dish doesn't plan to complete the deal until mid 2014, around a full year after SoftBank's planned July completion date. After calculating various synergies, Son values the Dish offer at $6.31 a share, next to SoftBank's $7.35.

Dish has "no understanding whatsoever about the real situation of Sprint," Son believes, saying that the rival has no mobile expertise and pointing to its history of litigation and uncommitted financing. SoftBank has a "proven track record" with growth, he argues, and Dish has neither growth in its own business or experience in the mobile space. "Do you want to attach a satellite dish to your smartphone?" Son jokingly replied to a question about Dish's possible benefits to Sprint customers. "It's going to become much heavier."

Dish has "no understanding whatsoever about the real situation of Sprint"

SoftBank's operating profit for the year was ¥745 billion ($7.62 billion), a record figure which Son expects to improve in the upcoming year; he describes his company as the "fastest growing in the world." The CEO believes that the Sprint deal will still go through on July 1st as planned; earlier today it emerged that Intel head Paul Otellini had thrown his support behind the Japanese carrier.

SoftBank buys Sprint: everything you need to know about the multi-billion acquisition