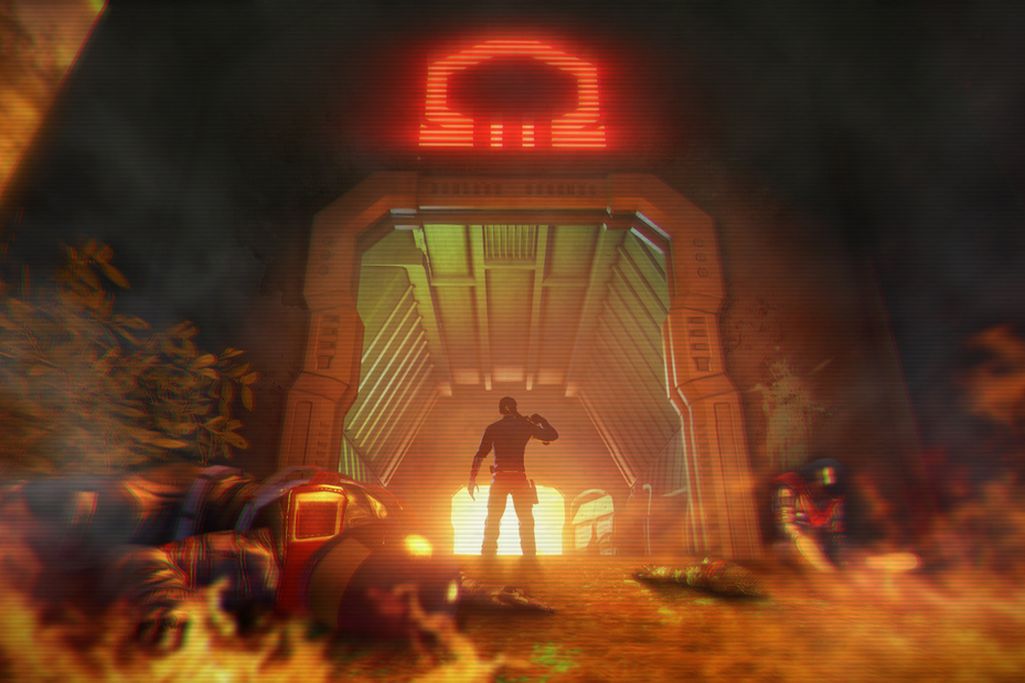 Far Cry 3: Blood Dragon is a ridiculous game. It's what would happen if you took the gameplay of open-world shooter Far Cry 3 and mixed it with your favorite sci-fi action flicks from the '80s and early '90s — there's a little Terminator, a little Alien, and a whole lot of neon. It's a modern game with a retro aesthetic, a big dumb shooter that isn't ashamed to be what it is.

If you haven't played Far Cry 3 or any of its predecessors, there's nothing to worry about as Blood Dragon is a stand-alone experience, available today on PS3 and tomorrow on Steam and the Xbox 360. You'll be placed in the cybernetic boots of Sergeant Rex "Power" Colt (yes, that's his real name), a cybercommando with a love of explosions and really bad puns. During the opening tutorial, when you're initially unable to fire a weapon — or even move — he complains: "I just want to kill people, damn it!" Blood Dragon takes place in the future as it was imagined three decades ago — it's 2007 and the planet has been devastated by nuclear war. There's a story that involves saving the world from a formerly good soldier gone rogue, but really it's all just an excuse to blow stuff up. Missions will have you infiltrating laboratories to set bombs before zip-lining away, using a flamethrower to destroy a lair filled with mutant dragon eggs, and hunting rare and dangerous animals with your rifle.

Unsurprisingly, the game plays just like Far Cry 3, so fans of that game will feel right at home. There's a core set of missions that take you through the story, but also a large number of side quests to keep you busy beyond that. In a lot of ways it's more fun to simply wander the dark, neon-soaked island to clear buildings of bad guys and see what else you might run across.

Just like in Far Cry 3, there's a dynamic element to the game's events — you can run through a herd of what appear to be robot ostriches, or stumble into a giant battle between a platoon of cybersoldiers and an angry blood dragon (think a T-Rex crossed with a glow stick). Take a dip in a lake and you just might encounter some robot sharks. Since these events are random in nature, they make exploration all the more exciting. You never quite know what you might run across. The game also gives you multiple options for completing goals — sometimes it's easier to lure a blood dragon to do your dirty work, while you simply sit back and watch the carnage you've created.

And of course it wouldn't be a postapocalyptic '80s action flick without some cool toys. You'll start out with a seemingly mundane lineup of weapons — rifle, shotgun, the usual — but you'll unlock both new weapons and ridiculous upgrades as you collect items and finish missions. Before you know it you'll have a glowing blue bow and arrow and a four-barrel shotgun. And as a cybernetic soldier, you also have other abilities, like an incredibly fast running speed and cyborg vision that lets you "tag" bad guys for easy detection. All of that is to say that Blood Dragon goes out of its way to make you feel like a badass. As Rex himself says, "Guns make me safe. Bigger guns make me safer." 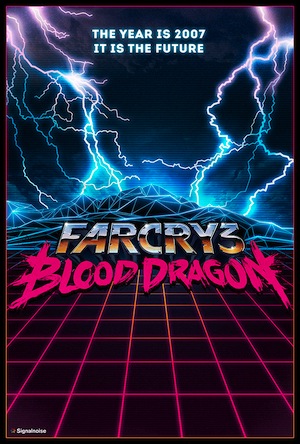 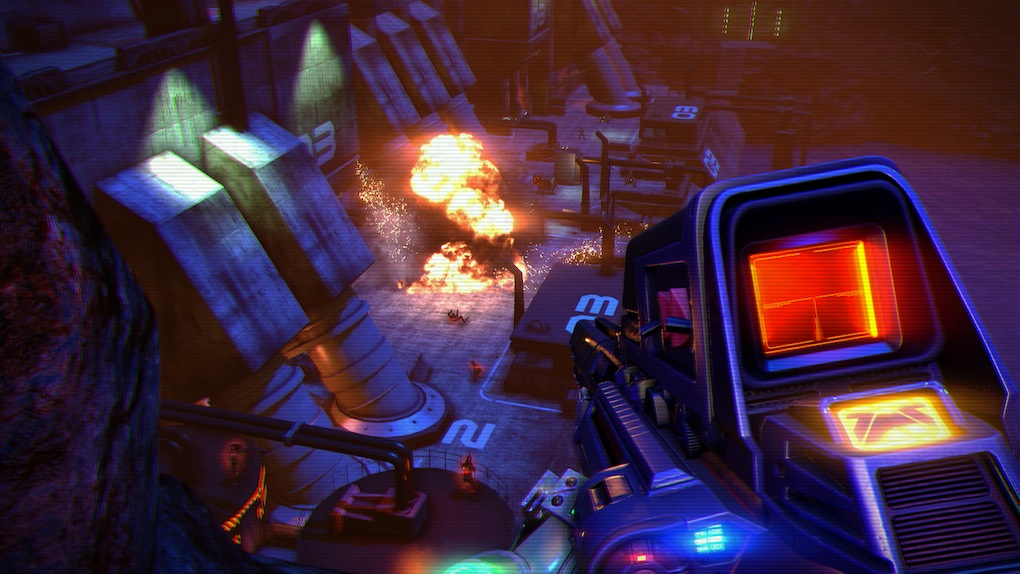 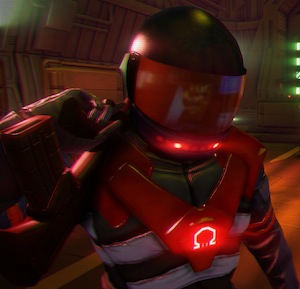 This all makes for a game that's fun to play, but it's the smaller touches that make Blood Dragon so good. Like the way Rex will reload his shotgun by tossing bullets into the air and catching them, or how he'll throw up horns in the middle of a firefight. The dark visuals punctuated by a neverending supply of glowing neon lights help create the ‘80s vibe, but it's really the music that cements it — Power Glove's soundtrack captures the mood so perfectly you'll think you're playing the game on a VCR.

And then there's the dialog. Rex — appropriately voiced by Michael Biehn, best known for his roles in Terminator and Aliens — will regularly spout off one-liners about riding shotgun (while reloading his shotgun) or getting to the heart of the matter (while ripping out the cyberheart of a fallen robot enemy). Just like the rest of the game, the dialog is over-the-top, but in a way that shows reverence for the source material. Blood Dragon may make fun of classic sci-fi action movies, but it was clearly made by people who love them. Even the game's digital cover was designed by James White who, among other things, created this amazing poster for the film Drive.

It's not perfect, though. For a game where the story means so little the retro, pixelated cut-scenes can drag on far too long. And while the dialog is often hilarious, it can repeat a little too often, especially when it comes to the puns. If you find yourself using one particular weapon at the expense of the others, get ready to hear the same lines over, and over, and over again. I also ran into some technical issues early on when it came to the AI: a few times, while escorting a scientist or hacker through an enemy-infested building, the character would simply stop, making it impossible to complete the mission and forcing a restart from the previous checkpoint.

That does little to diminish the overall impact, though. Far Cry 3: Blood Dragon is a game that makes you feel like the Terminator while using weapons ripped out of RoboCop to fight bad guys straight out of Cyborg. It feels new and old at the same time, and for those with an affinity for retro, dystopic sci-fi, it feels just right — it's like seeing an old friend, who just so happens to have a flamethrower in one hand and a grenade in the other.