In just weeks, the Korean giant will assemble a massive US retail presence out of thin air

In suburban Dallas, a Best Buy towers over an expanse of concrete, cars, fast food joints, and other retailers jockeying for shoppers' attention spans, its trademark angular blue pillar jutting above the main entrance. Statistically speaking, the scene could just as easily describe a Best Buy near your home anywhere in America. "70 percent of the US population is within 10 miles of a Best Buy," says Ketrina Dunagan, a Samsung executive who runs retail marketing for the company's US phone business.

And that ubiquity is not to be taken lightly: starting next Monday and continuing through June, Samsung will open "Experience Shops" inside over 1,400 Best Buy and Best Buy Mobile locations nationwide. 900 of those will be open by early next month. Practically overnight, Samsung will have over five times as many US stores as Apple.

Practically overnight, Samsung will have over five times as many US stores as Apple

Granted, Best Buys also have dedicated Apple kiosks, but this is very different. Samsung has been operating a pilot Experience Shop at this Dallas location since mid-February, and its presence is striking: the moment a customer walks into the store, shiny, 10-foot-tall signage bearing "Samsung Galaxy S" branding beckons from dead ahead. It's quite literally the first thing you see once you're through the door. And the Shop consumes significant floor space — some 460 square feet, with smaller configurations for smaller stores (an employee manning the Shop during my visit told me it displaced this Best Buy location's CD aisles, a long-overdue retirement). Samsung is hiring and deploying thousands of people to staff the facilities alongside Best Buy "blue shirts." You'll also be able to purchase and activate a Samsung phone without leaving the area; Apple's kiosks are primarily focused on iPads and Macs. 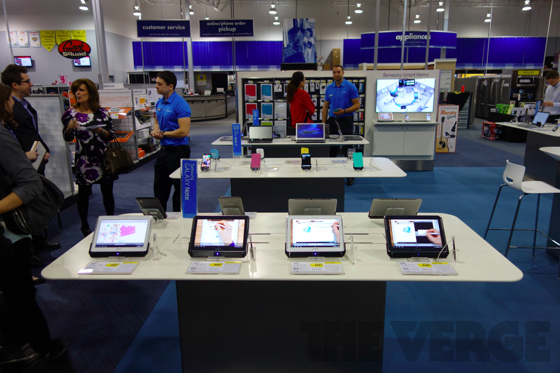 Three rows of tables — with ample room between for milling about — display a variety of Samsung phones, tablets, and Windows laptops (Chromebooks are still relegated to another section of the store, strangely). Beyond, a colorful wall of official Samsung accessories — prized by retailers for their typically high margins — beckons buyers the instant they decide to pick up a Galaxy S III or Note 10.1. Another table off to the side displays the Galaxy Camera, available in Wi-Fi, AT&T, and Verizon versions, complete with a thick book of sample photos using different software effects.

Even though countless types of Samsung products are sold in Best Buy — televisions, Blu-ray players, refrigerators, microwaves, the list goes on — the Shops are strictly about mobile. That's simply where the money is. You'll still need to walk around to the other (far less shiny) big box departments the next time you're in the market for a 55-inch LCD or a washing machine. "Our feeling is mobile has the quickest replacement cycle of all... this is step one," Dunagan tells me. It some ways, it's a microcosm of Samsung on the whole: an enormous conglomerate, the largest of South Korea's notorious chaebols, with countless divisions operating mostly out of sync. It's entirely possible the Samsung washing machine guys didn't even know this project was underway.

Will this all-out marketing blitz bury the HTC One?

For competitors — most notably HTC, which is trying desperately to score a global hit this year with the One — the Experience Shop is a grim reminder of Samsung's enormous power, cash, and willingness to spend its way into consumers' minds at any cost. The company first began negotiations with Best Buy for the 1,400-store deployment last December, had its first location operating two months later, and will be fully rolled out nationwide just four months after that. Having spent time with both products, it's entirely possible that the HTC One is a better product than the upcoming Galaxy S4. It's also entirely possible that this all-out marketing blitz — a blitz that HTC simply can't afford on this scale — will bury the One regardless. 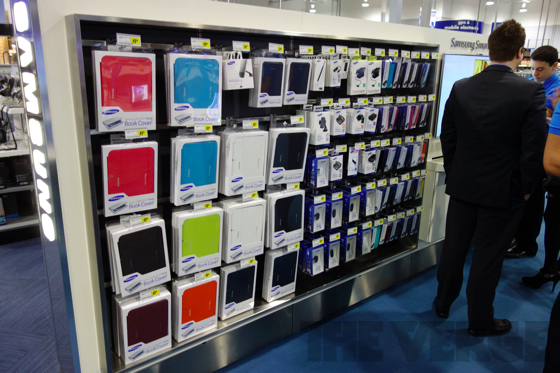 When asked why Samsung didn't pursue standalone branded retail stores of its own, Dunagan was prepared for the question. "We felt that this partnership was the quickest way to address consumer needs," she said. Needless to say, not even Samsung could have 1,400 independent shops built and operating inside of six months.

While the Experience Shop might be an effective way to get the Samsung brand drilled into millions of consumers' heads (assuming the company's near-constant barrage of high-dollar television advertising hasn't already managed to do that), it isn't perfect. Critically, Samsung hasn't managed to duplicate what is perhaps the Apple Store's most important feature: the Genius Bar, which has become the benchmark for retail tech customer support in the past decade. Though reps will be able to walk both new and old customers through features and perform software updates in-store, hardware problems will be subject to normal Best Buy policy; if you have a Geek Squad service contract, stores will be able to initiate a replacement. That's about it. "We'll continue to evolve that experience as time goes on with some other pilots that we'll launch in the mid part of this year, but right now, it's primarily how-to and software updates," Dunagan says.

At least some Experience Shops will be receiving Galaxy S4s ahead of retail launch, a good draw for savvy customers who want to check it out before it's available and pre-order.

But want an HTC One instead? Head a few feet away to Best Buy's crowded mobile aisles, where you'll likely find it crammed in alongside dozens of miscellaneous phones of all vintages. For HTC, LG, Sony, BlackBerry, and anyone else not named Apple or Samsung, that could spell a tough 2013 against a pair of deep-pocketed giants.