Drones will save us, drones will destroy us: citizens sound off at FAA meeting

Drones will save us, drones will destroy us: citizens sound off at FAA meeting

When it comes to allowing drones to fly over US soil, Americans are of two minds: embrace domestic drones for such uses as crop dusting, high wire inspection, search and rescue, and border security, or run screaming and seek shelter from the surveillance state in the sky. Those dueling views were on display yesterday during a "public engagement session" hosted online by the US Federal Aviation Administration to gather input from citizens on the coming swarm.

It quickly devolved into a massive venting session

The two-hour long livestreamed conference call was open to any member of the US public to participate, providing citizens another opportunity to comment on the agency's newly proposed privacy policy on drones. But it quickly devolved into a massive venting session for and against the FAA's proposed drone privacy policy, and drones themselves. Many callers complained they couldn't even find the draft privacy policy document online.

For the record, the policy is located right here, although it is not readily apparent how to find this link from the FAA's main page. Perhaps the confusion is the agency's use of the moniker "unmanned aerial systems (UAS)," its preferred term for drones, also the one favored by drone industry lobbyists.

"What you're doing here is a sham."

"What you're doing here is a sham," said a woman from Prescott, Arizona, to the FAA, frustrated about being unable to locate the policy and what she deemed to be poor advance notice of the call. She said that if the FAA were serious about privacy, "you would not have placed tiny brief in our newspaper and devised this circuitous response scheme," later blasting the FAA's refusal to use the term "drone," to describe the aircraft. "A drone is a drone," she said.

Prescott is among the places around the country where local government officials have submitted applications to an FAA program to test commercial drones at six locations for a variety of uses, from police and agricultural surveillance to weather monitoring to firefighting. The FAA is aiming to finalize the sites by the end of the year, delaying the process by a year from its original timeline. In total, organizations from 37 states have applied, but the FAA hasn't released a list of all the applicants for the new sites. It has, however, published information online on a few of them thanks to Freedom of Information Act requests.

Another woman from a would-be drone test site near Brookesville, Florida, was concerned about potential drone crashes and surveillance in her "tight community." "Drones have crashed in other countries, and we're right in the middle of a populous area," she said, referring to military drones.

But the call brought out staunch drone proponents of these sites and of commercial drones, too. A self-identified lawyer from St. Louis, Missouri, made the (false) assertion that private drone ownership was protected under the US Constitution for the purposes of "self-defense."

"The right to deploy drones in your surrounds to protect yourself is a Constitutional right," the man said. "It will allow us to eliminate weapons of all other sorts." He also noted he was working on a "business model" for a commercial drone fleet that would fly over urban areas at night and monitor them for lights left on so the energy-inefficient buildings could be identified.

"[Drones] will allow us to eliminate weapons of all other sorts."

A representative from the drone lobbying group the Association of Unmanned Vehicle Systems International (AUVSI) touted the economic benefits of drones and said "we do not believe the FAA should govern UAS based on privacy concerns."

The FAA didn't answer any questions and didn't participate much in the call at all, except for a brief opening statement by deputy Transportation Department secretary John Porcari. "This is designed to be a forum to allow the FAA to hear form the public on this approach," Porcari said. After that, the call moderators tried to maintain order by giving each caller three minutes to speak their peace, and asked for them to remain polite. Still, many callers vocally shamed one another and the agency itself. 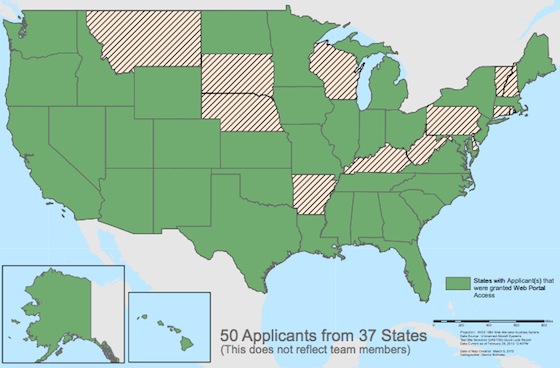 FAA map showing all the states where agencies have applied to be one of six drone test sites picked by end 2013.

The reason the FAA found itself in this position is due entirely to Congress. In a bill last year, lawmakers specifically mandated that the FAA figure out a way by 2015 to allow drones to fly safely through US airspace higher than 400 feet above ground, the ceiling for model aircraft. The FAA has granted about 1,000 waivers to local agencies to fly drones underneath this height since 2009, but only about 300 are active today. In order to get drones into US airspace at higher altitudes, the FAA first needs to understand how they will communicate with other aircraft, avoid violating people's privacy, and minimize risk to other piloted aircraft and those on the ground.

"[Drones] must operate in accordance with federal, state and other laws" on privacy

The test sites program is designed to do just that, and the current draft privacy policy is supposed to be part of the FAA's legally binding contract with selected test site operators. But as it stands right right now, the privacy policy reads fairly broadly, with only four major points, including such common sense regulations as that the test sites must "operate in accordance with federal, state and other laws regarding the protection of an individual's right to privacy," and that they must "ensure that there are privacy policies governing all activities," on their site.

"My concern is about safety issues."

Many of the callers questioned whether the FAA should be in charge of making privacy policies in the first place, a duty not spelled out in its official operating responsibilities. Instead, many callers — including many private pilots — said that the FAA should focus mainly on the safety issues posed by having drones of all sizes flying through airspace already crowded by manned aircraft.

As one pilot on the call put it: "my concern is about safety issues. How will they regulate or control safety around airports? We should be getting a flight briefing of any UAV activity in the area." The FAA will have to come up with answers to his and the other myriad questions about drones by the time it announces the first six test sites later this year, well before the swarm hits skies in 2015.