Bill Gates, 18-year-old Harvard freshman, is looking for a job

Bill Gates, 18-year-old Harvard freshman, is looking for a job

The event that saw Microsoft co-founders Bill Gates and Paul Allen pose for a classic photo reenactment has turned up another gem from the pair's early history. Seattle's Living Computer Museum held a gathering last night for many of founder Paul Allen's friends and fellow technological luminaries, and it also managed to dig up Gates' and Allen's pre-Microsoft resumes.

At the time Gates was a freshman at Harvard; he said he'd be available from June 1974, would be happy to work "anywhere," and suggested a salary baseline of $15,000. Both Gates and Allen worked at Honeywell in the summer of 1974, before Gates dropped out of Harvard the following year to start Microsoft. Two decades later, Gates would be anointed the world's richest man. 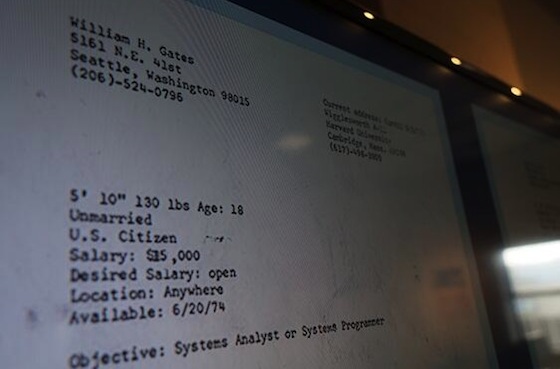 Are you enjoying a wifi connection right now? You can thank Vic Hayes for that. #LCMCelebration twitter.com/LivingComputer…

Here's a pic of @bobfrankston, who made VisiCalc- the very first spreadsheet program! twitter.com/LivingComputer…