The missile defense system that could stop a North Korean attack

Share All sharing options for: The missile defense system that could stop a North Korean attack

North Korean leader Kim Jong-un this week authorized a nuclear attack against the US, raising tensions in Washington and across the globe. Kim's announcement comes a day after the Pentagon announced plans to deploy an advanced missile defense system to Guam, in a "precautionary" attempt to safeguard American interests in the region.

The US began conducting military exercises in South Korea last month, in a move that prompted Kim to issue threats of retaliation against American bases in Guam and Japan. According to the Department of Defense, it's this provocation that triggered the Pentagon's latest deployment.

The Pentagon introduced its first missile defense systems on Monday, when it positioned the USS McCain off the coast of South Korea. The guided-missile destroyer is capable of destroying medium- and long-range missiles, and is currently the only ship of its kind in the region.

In the coming weeks, the McCain will be supported by a Terminal High Altitude Area Defense system (THAAD), to be stationed in Guam. Manufactured by Lockheed Martin, THAAD is a relatively new land-based system designed to destroy incoming missiles during their final phase of flight. Since 2005, the system has completed 12 successful intercept tests, though it has yet to be used in battle situations.

"This deployment is a prudent precautionary measure in response to North Korea's specific threat to target US bases in the Pacific with its long- and intermediate-range ballistic missiles," Lt. Col. Monica Matoush, a Defense Department spokesperson, said in an e-mail to The Verge.

Each THAAD battery consists of four main components: a truck-mounted launcher, a set of interceptors (eight per launcher), radar surveillance equipment, and a "fire control" communication system that links the unit to the military's broader Aegis Ballistic Missile Defense System (Aegis BMD). The system receives commands from Aegis and data from military satellites, and will work in concert with Patriot surface-to-air interceptors, which are designed to deflect shorter-range missiles. 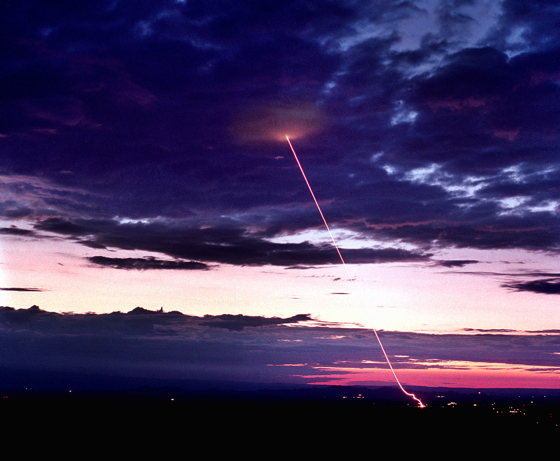 Unlike Patriot systems, THAAD doesn't rely on explosives to destroy incoming missiles. Instead, the battery's 18-foot-long missiles destroy targets by simply colliding with them — so-called "Kinetic Kill" technology. THAAD's interceptors have an estimated range of up to 200 kilometers (124 miles), and are capable of striking incoming missiles both inside and just beyond the Earth's atmosphere, allowing for a broader range of defense.

Matoush tells The Verge that THAAD's high-altitude interceptors can minimize the impact of weapons of mass destruction before they reach the ground, and that they have proven "highly effective" against the asymmetric trajectories of ballistic missiles. The system completed an ambitious test in October, hitting four out of five targets, and intercepting a medium-range missile for the first time, according to the Missile Defense Agency.

"We are well postured to defend against North Korean provocation."

Matoush says THAAD will be added to "an array" of missile defense systems already implemented in Japan and South Korea, though she refrained from explaining how, or under what circumstances it would be used. "While I can't disclose further operational details, I can tell you that we and our allies [are] well postured to defend against North Korean provocations," the spokesperson said.

Matoush also declined to reveal details on the responsiveness of American missile defense systems, citing security concerns, but estimates suggest that the military would have to react within a relatively short window.

If North Korea were to launch a long-range intercontinental ballistic missile against the US, it would travel at a maximum speed of around 15,700 miles per hour, based on estimates for similar projectiles. That means it would take about 14 minutes for it to reach Anchorage, and about 17 minutes to hit Honolulu. A medium-range missile traveling at a maximum speed of 6,700 miles per hour would take about 19 minutes to reach Guam, though it should be noted that speeds will likely vary depending on the phase of launch, and US response time would vary according to the location of anti-missile systems.

The Pentagon previously deployed a THAAD unit to Hawaii in 2009, in a move to defend against a possible North Korean strike. At the time, US officials said Pyongyang was still several years away from developing a missile capable of reaching American shores, though recent developments suggest that Kim's regime may already have that capacity. 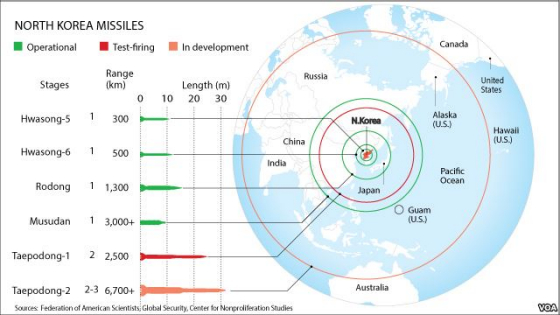 In December, North Korea successfully launched a Unha-3 rocket, using the vessel to send a satellite into orbit. Intelligence assessments from South Korea showed that the rocket has a range of 6,200 miles, potentially putting cities like San Francisco at risk, though most experts say North Korea still lacks the technology to launch an intercontinental nuclear warhead.

According to data from the Federation of American Scientists and the Center for Nonproliferation Studies, North Korea's operational missiles still aren't capable of reaching Hawaii, let alone the US mainland. With an estimated range of at least 3,000 kilometers (1,864 miles), its Musudan missile could strike Japan, though it remains unclear whether it could reach Guam, and it has yet to be tested.

Experts say the country's Taepodong-2 ballistic missile may be capable of reaching Alaska or Hawaii, though it failed during its only test, in 2006. Last month, the Pentagon said it will deploy 14 ground-based interceptors at Fort Greeley in Alaska, in response to growing concerns over North Korean provocations.

"The moment of explosion is approaching fast."

The Obama administration has publicly downplayed the gravity of North Korea's threats, insisting that the crisis can be resolved through diplomacy rather than military action. But Defense Secretary Chuck Hagel painted a more urgent picture in a speech delivered Wednesday, just ahead of the Pentagon's deployment.

"They have a nuclear capacity now," Hagel said. "They have a missile delivery capacity now. And so, as they have ratcheted up their bellicose, dangerous rhetoric... some of the actions they have taken over the last few weeks present a real and clear danger."

North Korea, meanwhile, has only amplified its rhetoric following the Pentagon's announcement this week. Today, Seoul’s Yonhap News Agency reported that Pyongyang moved a medium-range missile to its east coast, in preparation for what could be a "preparatory move for an imminent liftoff."

South Korea's Defense Minister later said that the missile isn't aimed toward the US mainland, though it is believed to be capable of reaching a "considerable distance." According to Yonhap, American and Korean intelligence suggests that the missile in question may be a Musadan, potentially putting Guam and Japan at risk.

Some fear that Kim may choose to strike in mid-April, when the country celebrates the birthday of founder Kim Il-sung, though the regime says an attack may be even more imminent. On Thursday, state news agency KCNA reaffirmed North Korea’s threats of nuclear war, warning that "the moment of explosion is approaching fast."