Ten billion years ago, a star exploded with the intrinsic brightness of 1 billion of our suns, and the signs of its explosion have now reached the Hubble Space Telescope where it caught the eye of observers. Researchers have today announced the discovery of what is now the oldest known supernova of a select type that can be used to measure cosmic distances. Over three years, the research team recorded near-infrared imagery about every 50 days in the search for supernovas of this type. The new supernova is around 350 million years older than the previous record breaker, which was announced three months ago.

Discoveries of supernovas of this type act as observational evidence that the universe is expanding at an increasingly fast rate. By continuing to find such supernovas, researchers can refine the accuracy of their dating and measurements. This new supernova was first spotted in December 2010, and has since been confirmed using data from the European Souther Observatory's Very Large Telescope. Confirmation required verifying the supernova's distance and determining that it matched the signature consistent with supernovas of this type. 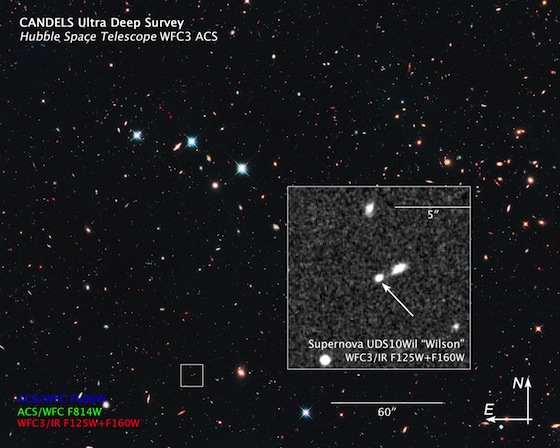