HTC's First won't compete on hardware, but does that matter to Facebook users?

HTC's First won't compete on hardware, but does that matter to Facebook users?

We weren't expecting HTC's First to be a barn burner in terms of hardware specs, and by all accounts it's not. As today's Facebook presentation made abundantly clear though, hardware isn't the focus here. Rather than trumpeting what a phone is capable of under the hood, HTC is riding Facebook Home, the social network's newest and "best" mobile experience, as a means to hook consumers.

Moreso than any handset in recent memory, the HTC First is a minimalistic shell meant to showcase the software users will be interacting with. You're not supposed to be concerned with its innards. HTC CEO Peter Chou's time on stage illustrated that perfectly; he didn't say a word about the First's screen resolution, nor did he have anything to share about processor speed or the device's camera performance. Details on storage capacity and memory? Nowhere to be seen. There were no comparisons with or trash talking of the competition. The lack of information could be considered somewhat surprising; Chou said his company has been working on First for some time, but taking a deep dive into the silicon inside wouldn't have jived with Facebook's theme of establishing a presence on all Android devices — not just one.

HTC doesn't want you to be concerned with hardware specs

It was only after Facebook's event concluded that HTC filled the gaps on what's inside the First — at least partially. The phone features a 720p 4.3-inch glass display, putting it in close proximity to Apple's iPhone 5 but behind the clarity offered by 1080p screens. Inside is a dual-core Snapdragon 400 processor running at 1.4GHz. We haven't seen this chip widely used elsewhere, and looking at numbers alone, it's thoroughly trumped by the latest processors inside Samsung's Galaxy S4 and HTC's own One. But our hands-on time with the First left us optimistic that it's capable of providing users with a smooth experience. Facebook also reportedly spent months optimizing Home's responsiveness, and performance is also aided by the gigabyte of memory on board here.

The First also includes a 5-megapixel rear camera with an f/2.0, 28mm lens. HTC hasn't yet offered up details on whether it's again gunning for strong low light performance here or if the reduced megapixel count is merely a byproduct of that $99 subsidized price. A capable camera would be a major asset for a phone squarely aimed at Facebook's billion-plus user base, so we're looking forward to seeing what kind of shots the First can produce. 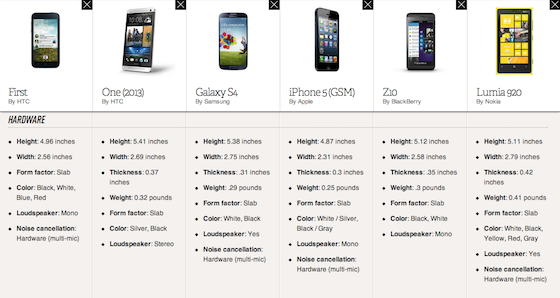 HTC has also revealed that the First carries 16GB of storage, a decent allotment considering the device's price point, and a 2,000mAh battery. Again, as we're somewhat unfamiliar with this Snapdragon chipset, it's hard to gauge whether the First will be able to carry you through a day. When it comes to build quality, the handset features plastic casing with a smooth matte finish. It's not going to approach the premium materials seen in Apple's iPhone 5 or the HTC One, but the First should be on par with other plastic-clad hardware on the market.

Considering that the HTC First's primary Android competition — the Galaxy S4, Note II, etc. — will all have (or eventually gain access to) Facebook Home, HTC isn't going to win this one on hardware alone. But AT&T's $99 asking price combined with a simplistic device aimed at the Facebook generation could prove compelling for more people than you'd think.

Compare this: HTC First vs. HTC One vs. Galaxy S4 vs. iPhone 5 and more