Nokia has released its first app for Windows 8 and Windows RT: Nokia Music. The app is a fullsize tablet and desktop version of the company's Windows Phone app (which goes by the same name), and it offers the same Pandora-like streaming radio functionality. As we first revealed in our hands-on with the app in February, users can create "mixes" by choosing up to three artists that they like, and you can skip songs in the playlist that you don't fancy. While you can't search for and play individual songs, you can download these automatically-generated playlists for offline use. You can also play music files saved locally to your device using the app, and it can generate recommendations based on your collection as well. Additionally, the app features artist info pages with biographies, tweets, tour dates, and galleries. You'll need a 3.99-per-month Nokia Music+ subscription to use the app, though a 7-day trial is included and you'll be limited to 30-second clips after that if you don't pay up.

Rumors of a Nokia tablet have been circulating for quite some time now, and the launch of this app suggests that the company may be accumulating a stable of Windows 8/RT apps that it will then make exclusive once it releases the much-rumored device. Just today, @evleaks linked to a website revealing a Nokia-made Adidas miCoach app on a mocked-up tablet (the page has since been taken down, but see image below). The technique wouldn't be very surprising: the Finnish company previously used its development muscle to create the Nokia Collection of Lumia-exclusive apps to promote its Windows Phone line. 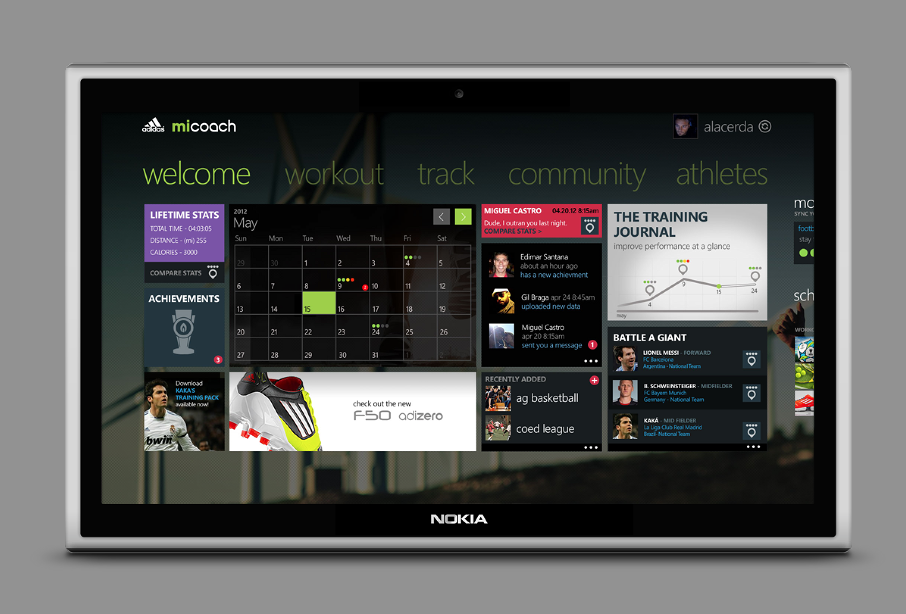