Scientists have used a custom-made 3D printer to make a synthetic tissue that could have a variety of applications — including the ability to transmit long-distance electric signals much like nerves. The process, published in Science by an Oxford University team led by Hagan Bayley, prints a network of droplets made out of aqueous solutions — a liquid mixture — instead of the solids that standard 3D printers produce.

The printer, made specifically for this experiment since already-existent models weren't up to the task, places tiny drops of liquid into an oil solution. The drops, instead of adhering to one another, are naturally separated by a lipid layer. When networks of these drops are printed in the tens of thousands — the researchers have produced networks containing up to 35,000 drops — the final result resembles caviar and has an elasticity similar to that of brain and fat tissues. These networks, according to the researchers, currently have a stable shelf life of a few weeks.

Tissue made of tens of thousands of droplets

The possibilities for this synthetic tissue get particularly interesting when you consider that the liquid inside the droplets can be swapped out. The researchers were able to send electrical signals through one of these networks by including membrane proteins inside the solution, allowing the 3D printed material to mimic nerves. As illustrated in the photograph below, researchers were able to effectively pass electric signals through a pathway of green droplets including the protein, which are insulated by other clear droplets. 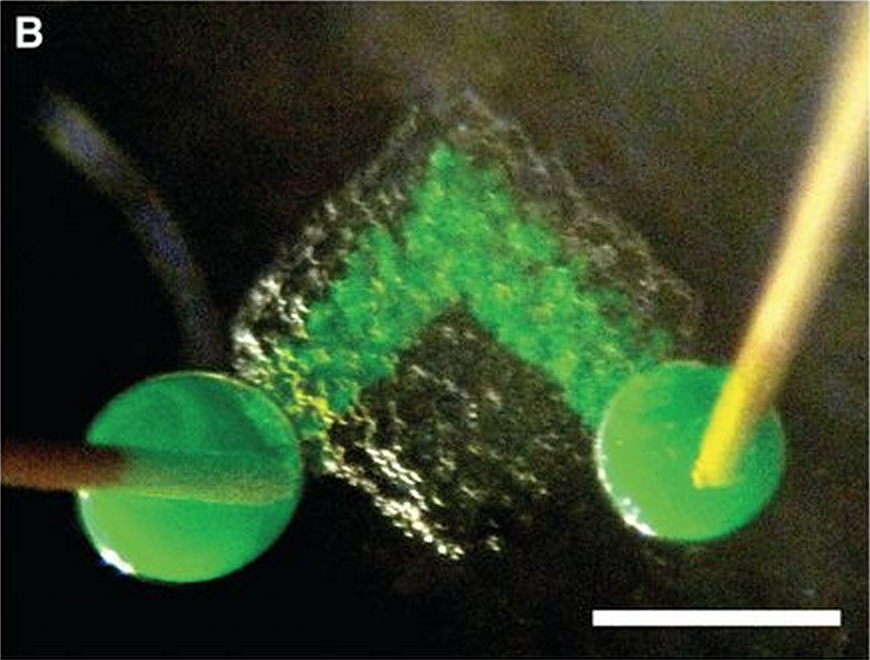 Another experiment used varying concentrations of solution in each droplet to create networks that can fold themselves into unique shapes that the 3D printer can't produce — like a hollow sphere that closes like the petals of a flower (see video at bottom of page). As you may remember from high school biology, water can pass through membranes to produce an equilibrium by osmosis; this action is what causes the structures to fold to the scientists' whims.

The development clearly reveals a new type of 3D printing, but the researchers say that as the networks get more advanced they may be able to integrate them with living organisms. They suggest that, with further development, such 3D-printed networks could help facilitate drug applications or help support failing tissues. They note that since this method is entirely synthetic, the networks lack a genome and the ability to replicate — avoiding some of the difficulties other artificial tissue production methods have faced. As lead researcher Hagan Bayley tells Oxford University, "we aren't trying to make materials that faithfully resemble tissues but rather structures that can carry out the functions of tissues."