Threats from North Korea are meaningless to me.

What If Kim Jong-un decides to push the button tomorrow? What can I do about that? Most likely, I'll learn that the missiles fell into the Pacific Ocean. Or if the rockets do make it into the air, maybe the US will shoot them down with its THAAD missile defense system. Most likely, nothing will happen.

Thanks to the substantial coverage of North Korea, Westerners aren't as calm as I am. Some Americans seem to feel genuinely threatened by North Korea, primarily because the media in the West is dramatically overplaying the events surrounding the Korean peninsula. Meanwhile, South Korea is underplaying them — as usual.

I've personally never felt any real danger from the North

Yes, South Koreans have become somewhat immune to North Korea's provocations. I've personally never felt any real danger from the North. Not once. Since the ceasefire between our countries in 1953, South Korea has endured countless "invasions" or threats of invasion involving North Korean troop movements, spies, or military maneuvers. We naturally grew accustomed to these kind of provocations, and with the presence of the US military in the South, it's become easy to ignore the North's actions.

When there's a big storm coming in, people usually rush to the closest store to buy whatever they need. Water, food, household supplies. I've witnessed queuing, and yesterday even joined in. But I wasn't shopping for extra food or water. I was in line waiting for an art exhibition near Hongdae: an area known for clubs and indie music. Almost a hundred people showed up and no one seemed to be bothered by the fact that North Korea was preparing for a missile launch. They seemed relaxed — normal even — while looking at the art.

I don't watch television, but I do pay attention to our major newspapers. North Korea's threats don't even make their way into the top headlines every day. Needless to say, I'm not taking the threats seriously, but I wanted the opinions of other people I know, just to make sure I'm not crazy.

A friend who recently completed his national military service after two years dismissed the signs of danger almost completely. He told me that he thinks the recent threats are nothing to worry about. My grandfather — a man who fought in the Korean War (he's on the left in the picture above) — doesn't think the North will engage in military action against the South. My father concurs. 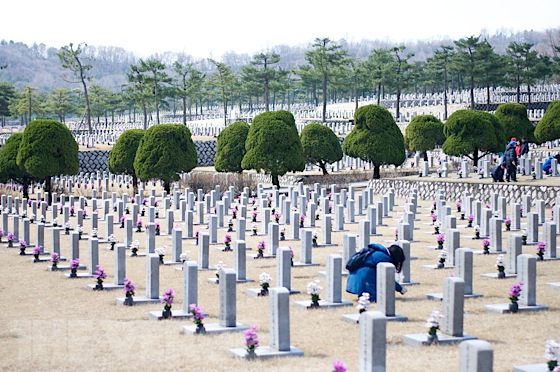 Seoul National Cemetry, for those who died in the Korean War

They agree with me that North Korea's recent boasts, threats, and troop movements are better described as irritations rather than actual provocations. But that doesn't mean that our family hasn't discussed the possibility of war.

How would South Koreans react to an attack? My mother argued that unlike the war in the 1950s, trying to flee further from the border of our two countries would be pointless — weapons have evolved. Those legitimately concerned for their safety would have to simply leave the country if they really felt they were in danger. But the working class here don't have enough disposable income to get their entire family out of the country and set up a life somewhere else. The idea of evacuating families from their homes is unrealistic. So what do you do? You stay put.

Anything to keep their audiences entertained

Writing and thinking about the danger (or lack thereof) posed by a North Korean attack has not only been a sanity check for me, but has also reaffirmed the reality of living in South Korea. In an effort to bolster Kim Jong-un's leadership and power within North Korea, his military came up with a plan to point missiles at the US and then tell the world about it. The global media immediately latched onto the news and began to cover the story non-stop. The next Arab Spring or Cyprus financial crisis or World War III: anything to keep their audiences entertained.

But despite what mainstream press might say about the tensions leading up to a military confrontation, I'll continue to live my life primarily as a college student. I imagine others will also carry on with their lives as usual, too.

Hyunhu Jang attends college at the School of Communication at Kookmin University Seoul in South Korea, and is a part-time intern for The Verge. The above thoughts are his take on life in South Korea during threats of North Korean violence.