Will a small server for social networks and cloud services make a difference?

Share All sharing options for: HP launches 'Project Moonshot' low-power server to try and save itself

Last month, during HP's annual shareholder meeting, CEO Meg Whitman told investors about what may be the company's most important product launch of the past few years. "This is not evolutionary innovation, this is disruptive innovation... This could truly be a revolution."

The hyperbole doesn't stop there. The product, which is being launched today, is called Project Moonshot — terminology that should conjure images of Google Glass and a self-driving car — and it's said to be the result of more than ten years of research. It's neither of those things, however: it's a new, low-power server for enterprises.

The hype may be justified, however: HP says that Moonshot uses 89 percent less energy than traditional servers that are currently being used while taking up 80 percent less space and costing 77 percent less. It accomplishes this by extending the modular setup behind blade servers — multiple computers that share power supplies, networking, and cooling in an enclosure — by stuffing up to 1,800 servers into the space that would typically max out at 128. Each Moonshot server is about the size of a hardcover book, and the first units are shipping today in the US and Canada.

Back when HP first revealed Moonshot 16 months ago, the news was that the company opted to use an ARM processor to power the servers for the same reason such processors are used in phones and tablets: low energy use and heat output. Since then, HP has decided to use low-power Intel "Centerton" Atom processors, but Moonshot is customizable, and versions that use chipsets from partners AMD, Applied Micro, Texas Instruments, and Calxeda (read: ARM-based designs) will be available. They'll also be customizable to use flash or hard drive-based storage, and they can be built with graphics processors. 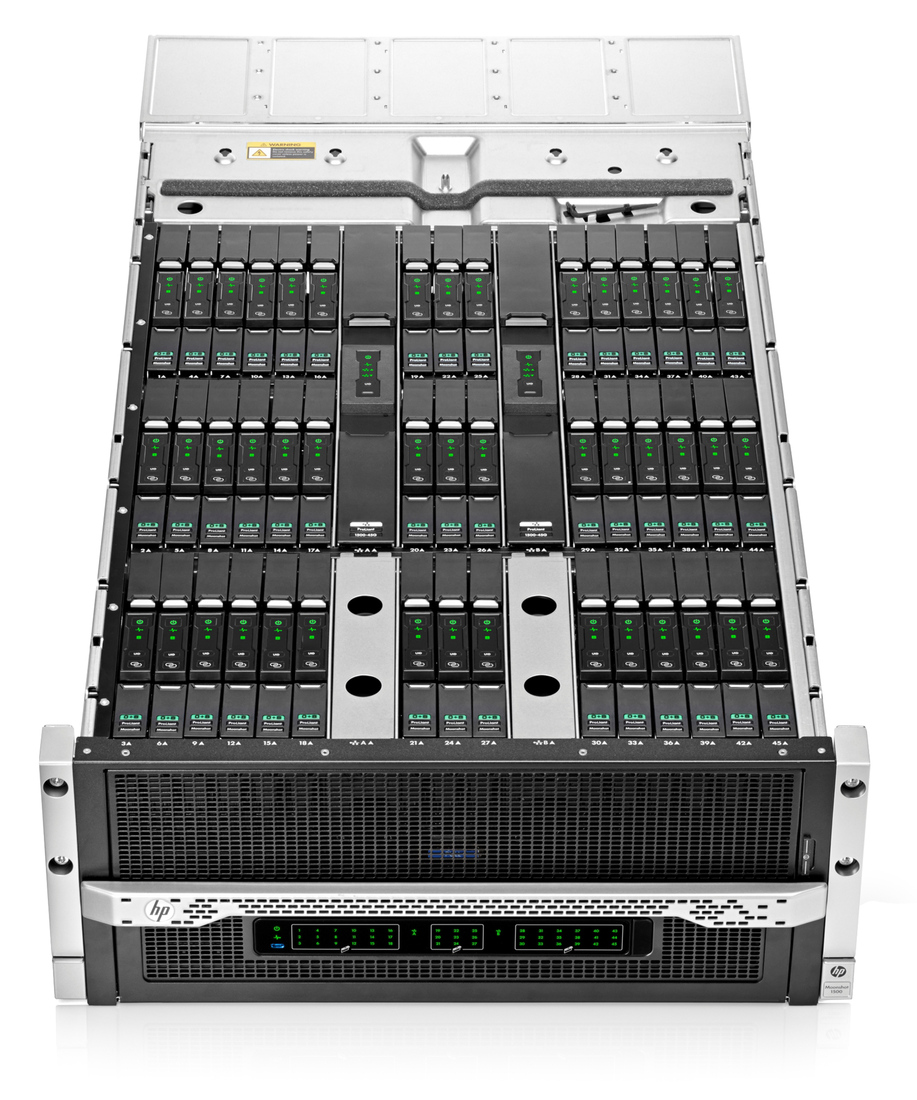 Who's supposed to purchase these servers? Enterprises, of course, but HP is specifically targeting those providing social media, cloud, and mobile services from data centers. Companies like Google, Facebook, and others have already opted to build their own servers in-house, unhappy with the options provided by those like HP, which is number two in the industry behind IBM. Moonshot may be too late to spark a revolution.

Project Moonshot may not be Google Glass, but, in some ways, it isn't so surprising for HP to focus so heavily on a server while minimizing the importance of consumer products. PC and printer sales — once central to the business — continue to drop, with a decrease of 15 percent in revenues year-over-year. Considering HP's troubles over the past few years, highlighted by four different CEOs, a mishandled purchase of Palm, and an $8.8 billion writedown on its acquisition of Autonomy, Moonshot is the company's attempt at moving past those mistakes and proving it can produce a successful and innovative product. We'll have to wait and see if this is enough to start righting the ship.