Taking Fox to cable could be a logistical and legal nightmare

Talk about mixed messages: when Aereo first began offering consumers a way to get free network TV over the internet — on any device and on demand — CBS CEO Les Moonves said last year that the service wasn't causing him any loss of sleep. Fast forward to yesterday and executives from News Corp are warning that, if Aereo persists, Fox may pull programming off the free public airwaves and make it available only to paid cable subscribers.

The networks allege Aereo is violating their copyrights and distributing their programming illegally, but after losing two significant court decisions, the TV bigwigs are taking their case to the public. According to a report in Variety, News Corp president Chase Carey told the audience at a conference hosted by the National Association of Broadcasters, "If we can’t have our rights properly protected through legal and political avenues, we will pursue business solutions. One such business solution would be to take the [Fox] network and turn it into a subscription service [...] It’s not a path we’d love to pursue. But we’re not going to sit idly by and let people steal our content."

Carey appears to be trying to pressure the courts and elicit some support in Congress. What everybody wants to know now is whether Carey is just making empty threats — or would he (and could he) really "go nuclear" with Fox?

Last year, all the top broadcasters — NBC, CBS, Fox, PBS, and more — filed copyright complaints against Aereo in federal court and tried to get the service shut down. Aereo, which is backed by billionaire Barry Diller, uses the internet to connect each subscriber to one of the thousands of tiny TV antennas housed at the company's facilities, allowing them to consume that TV programming via the web. Over-the-air TV signals can be accessed through aerial antennas by the public free of charge. A federal district judge and appeals panel agreed Aereo isn't in violation of copyright law and denied the networks' request to shut down the service.

The broadcasters say Aereo is just thinly-veiled piracy created as an end run around copyright law. Aereo, meanwhile, says this is the same old story of copyright owners stifling innovation that they can't control but could eventually help them (think Betamax and YouTube, for instance). Aereo founder and CEO Chet Kanojia says all his service does is give consumers the ability to access the free local airwaves and that helps build interest, which is good for the broadcasters. 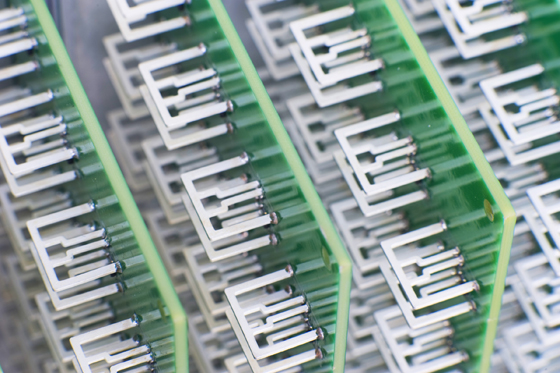 An array of Aereo's dime-sized antennas.

The broadcasters see things very differently. According to Rich Greenfield, an analyst with broker BTIG, Aereo poses a sort of existential threat to the TV networks. Currently they charge for the advertising you see in their broadcasts but they also charge cable services, such as Time Warner Cable and AT&T, to retransmit their broadcasts. If Aereo is allowed to take broadcasts for free, the argument goes, then why won't the cable guys do the same thing? Greenfield acknowledges that it would take years for Fox to unravel all the contracts and commitments involved with free TV, but Carey's dramatic comments illustrate just how much is at stake. "It is abundantly clear from what we heard from Carey," Greenfield said, "that Aereo poses an incredible threat to retransmission fees."

Would the Federal Communications Commission (FCC) sit still and allow Fox to pull its content off free airwaves? Peter Tannenwald, a lawyer and expert on FCC regulations, says he doubts the government would get involved. The move, however, could hurt one of the key points that broadcasters' make about why they shouldn't have to give up prized spectrum for mobile broadband services, which is that they provide quality TV programming free to people of limited means. Moving that programming to cable would clearly undercut the argument.

"The 'I'll take my ball and go home' strategy suggests they are not confident about winning on the law or facts."

At a minimum, yanking Fox off free TV would be an enormous undertaking that would take years to complete. It would also mean taking some serious risks, experts say. As a principal analyst at research firm Frost & Sullivan, Dan Rayburn has covered Internet streaming services for over a decade. "Broadcasters are always threatening someone," Rayburn said. "If they're not threatening to sue each other then they're threatening to drop over the air. I don't think anybody takes it seriously. Can you imagine how many contracts that would mess up?"

Tannenwald also thinks Carey would have to be very sure that there's a market for whatever he wants to put behind a paywall at a time when many reports say cord cutting is increasing. Perhaps the one clear message that Aereo and tech fans can take away from Carey's statements is that, at least in court, the Barry Diller-backed startup has the gargantuan TV networks on the defensive. Joseph Jeff, a spokesman for the Consumer Electronics Association, put it simply: "The 'I'll take my ball and go home' strategy suggests they are not confident about winning on the law or facts."