Shapeshifters: phones of the future could morph on demand

Share All sharing options for: Shapeshifters: phones of the future could morph on demand

Scientists in Europe have developed prototype devices that could drastically change the way we interact with our smartphones and tablets. The six working prototypes, known as "Morphees," are thin, electronic displays capable of automatically changing shape to perform certain functions. Researchers say that if brought to market, the devices could usher in a new era in mobile computing, breaking down the physical barriers that have traditionally defined smartphones, tablets, and gaming consoles.

Project leader Anne Roudaut, a researcher at the University of Bristol in the UK, outlined her team’s developments in a paper published this week for the Association of Computing Machinery (ACM). One design transforms a smartphone into the shape of a gaming controller, its edges folding downward to allow for more comfortable two-thumb playing; another caves inward like an origami flower, shielding the display from the view of strangers.

Each design incorporates different technologies and materials — wood, paper, and plastic — but they all point to the same vision.

"all mobile devices should change shape."

"In the future, all mobile devices should change shape so that form factor better fits functionality," Roudaut said Monday in Paris, where she presented her team's paper at the annual Conference on Human Factors in Computing Systems (CHI).

Such shape-shifting devices, she continued, would allow software makers to cater their applications to specific physical configurations. "We should all be able to go into an app store, download an application, and that application should come with its own form factor," Roudaut explained.

In an interview with The Verge, the researcher said her technology could be scaled up to tablet- or TV-sized form factors, though the six prototypes are still years away from deployment. Her current designs don't allow for high screen resolution, and they still require thinner, more powerful batteries. But two Morphee prototypes are significantly more advanced than the rest.

In one design, wooden tiles are sewn together with "shape memory alloys" — metals that bend when jolted with an electric current. As demonstrated in the above video, touching any corner of this display causes it to automatically fold upward, transforming it into a box-like shape. The other prototype uses "home-educated" shape memory alloys to fold into a cylindrical form, creating a more console-like configuration. According to Roudaut, its name derives from the fact that it can be programmed to morph into a specific form.

"You can actually train the material — you can educate the material to create a different shape," she tells The Verge. She notes that this capability could be used to turn a smartphone into a stress ball or to create different physical keyboards, though its future ultimately rests in the hands of developers.

"If we can give developers the tools to experiment, they may come up with many more uses — just like what Apple did with the App Store." 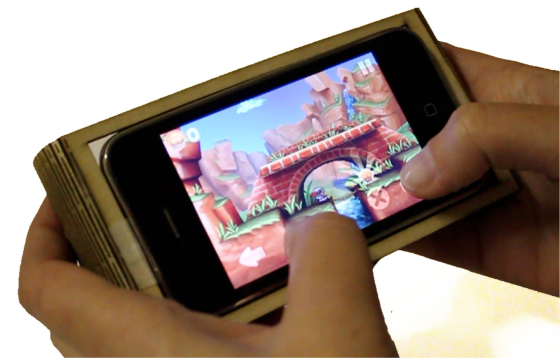 The immediate outlook may be uncertain for Roudaut’s Morphees, though major handset manufacturers have begun investing more heavily in flexible display smartphones, with LG promising to launch one by the end of this year. In the longer term, Roudaut envisions a world in which consumers evaluate mobile devices based not only on screen resolution and processing power, but on what she and her colleagues call "shape resolution" — technical specifications that describe a phone’s ability to change shape "on demand."

The idea is to create mobile devices with more affordance — qualities that clearly convey how an object should be used. A door knob, for instance, is clearly designed to be used in a certain way, as are more organic forms like bananas, their stems inviting users to pull back their peels. Smartphone design, by contrast, has thus far remained uniform and ambiguous, despite the rich variety of mobile apps.

"Affordance is everywhere in everyday life," Roudaut explains. "Shapes guide functionality, and I find it amazing that mobile phones don't do that."