Samsung may claim its smartphones are inspired by nature, but researchers at the University of Illinois are taking that concept much farther — they've designed a new digital camera system that draws from the eyes of insects. The system, which relies on a large range of miniscule focusing lenses and detectors arranged in a hemisphere, resembles the huge, bulbous ocular system of insects like the dragonfly or the praying mantis. The benefits of this new system include an exceptionally wide field-of-view with low aberrations and a depth-of-field described as "nearly infinite." The design, known as an "arthropodsuse compound design," uses an a swath of smaller eyes to work together and provide a better overall image. 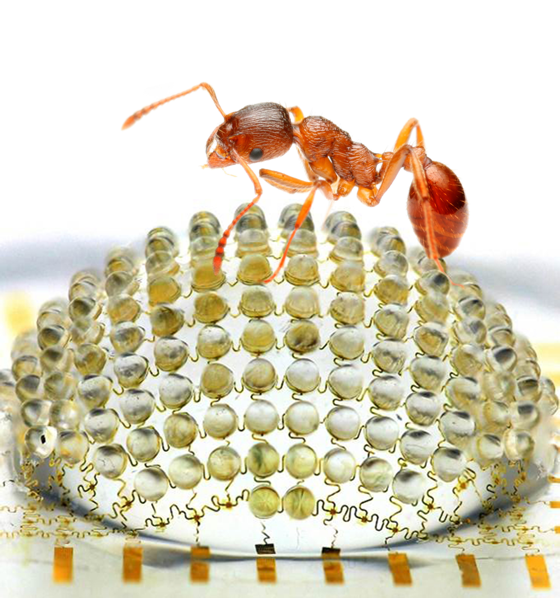 "Nature has developed and refined these concepts over the course of billions of years of evolution," said lead researcher John A. Rogers. "Full 180-degree fields of view with zero aberrations can only be accomplished with image sensors that adopt hemispherical layouts — much different than the planar CCD chips found in commercial cameras." The researchers have spent several years constructing components that allowed them to build this new camera system, specifically the rubbery optics necessary to make up the hemispherical camera system — the electronics in this system have similar properties to an elastic band. "A critical feature of our fly's eye cameras is that they incorporate integrated microlenses, photodetectors, and electronics on hemispherically curved surfaces," said Jianliang Xiao, coauthor of the study. There's no word yet on how this technology might be deployed — but the study was co-funded by the Defense Advanced Research Projects Agency (DARPA), so it wouldn't surprise us to see this used in the military someday.