Don't count them out yet: Facebook shows steady mobile growth in latest earnings

Don't count them out yet: Facebook shows steady mobile growth in latest earnings

Facebook's Q1 2013 earnings are in, with total revenues of $1.46 billion and mobile ad revenue constituting 30 percent of overall ad revenue. As expected, Facebook calls 2013 "an investment year," so its operating margin fell from 36 percent in Q1 2012 to 26 percent this quarter. Facebook is obviously willing to spend money and see lower profit margins now to ensure that it is well-positioned in mobile.

Facebook says that it had 665 million daily active users on average in March, up from 618 million in Q4 2012 and a 26 percent increase year-over-year. Monthly active users hit an impressive 1.11 billion — Facebook had hit a billion active users last October. 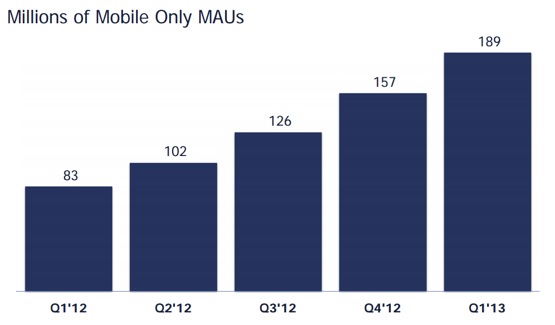 Facebook only introduced its new Android software, Facebook Home, in April. It doesn't (yet) specifically serve ads on the homescreen, so it's not likely to have made much of an impact on Facebook's bottom line. Similarly, it's unlikely that there has been any significant difference made from the HTC First, which comes with Home pre-installed. However, we're sure the company is eager to talk about them — and hopefully talk about actual install numbers for Home. Facebook will start its earnings call at 2PM PT / 5PM ET, and we'll let you know if we hear more details then.