When you're buying a new computer with performance in mind, integrated graphics are generally not the ones you want. Even though they've improved greatly over the years, "Intel HD Graphics" has become synonymous with "doesn't play things very well," continually lagging behind dedicated GPUs from the likes of AMD and Nvidia.

Now, Intel hopes to break the cycle and the naming association in one fell swoop. The company claims its new Intel "Iris" Graphics, embedded in upcoming Haswell CPUs, can offer double or triple the performance of the Intel HD Graphics 4000 that comes with current Ivy Bridge processors. That's significant: typically each generation offers only a double-digit percentage boost.

That doesn't mean every new Haswell processor will come with quite that level of graphics performance, though. Intel will actually have five tiers of integrated graphics in 2013, including Intel HD, Intel HD Graphics 4600, Intel HD Graphics 5000, with Intel Iris 5100 and Iris Pro 5200 at the very top. 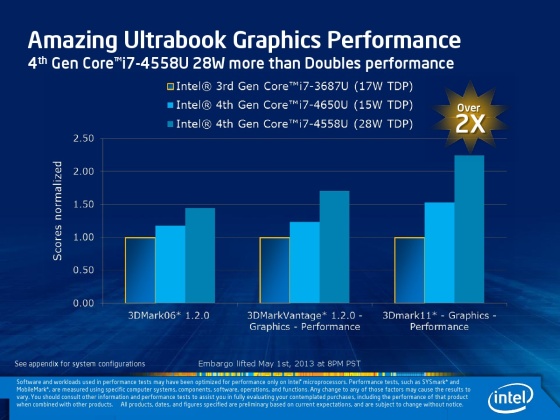 As you can see in the chart above, only the higher-power 28W laptop processor manages a 2x performance boost where laptop chips are concerned, and those chips may require too much cooling for the thinnest and lightest laptops. Presently, most Ivy Bridge ultrabooks have processors with a 17W TDP, and those will probably be refreshed with 15W TDP or lower designs instead. As you can see, the new HD Graphics 5000 that comes in the 15W TDP Haswell processor does offer a performance boost over Ivy Bridge, but it's not nearly as significant. For ultrabooks, Intel's focus is on all-day battery life, not graphics.

On beefy laptop processors, or desktop processors with plenty of cooling, there can really be a noticeable difference. The new desktop class (65W TDP) Core i7-4770R shows nearly a 3x boost in 3DMark 11 benchmarking tool, and a 47W TDP Core i7-4960HQ shows a 2.5x boost as well. See the former below:

Since we haven't seen Nvidia or AMD's next mobile graphics yet or tried Intel's Iris, it's too early to say whether Intel's finally made integrated graphics better than "good enough," but they definitely sound much improved. Either way, the Iris label should hopefully help you distinguish between computers on the shelf.

Update: We got to try Intel's Iris graphics inside the company's new Haswell processors, and they're actually pretty impressive. They can also fit inside some incredibly tiny gaming machines.