Stanley Kubrick's 2001: A Space Odyssey is one of the most cryptic films ever made, having spawned high brow critiques and debates that have endured for decades. Explaining it to kids, however, is apparently a much simpler task. That's what Howard Johnson did in 1968, with a promotional children's menu that puts Kubrick's acid-infused futurism in comic book form.

The menu, recently published on the blog Dreams of Space, follows siblings Debbie and Robin as they attend the 2001 premiere with their parents. The kids are struck with awe and amazement as the movie unfolds, and leave the theater with dreams of one day becoming a space pilot and stewardess. It's a testament to the idealism and fascination that defined the US space race, but at the time, the menu was more promotional than anything else; the Howard Johnson logo was prominently featured in 2001, adorning the space lounge of Kubrick's future. 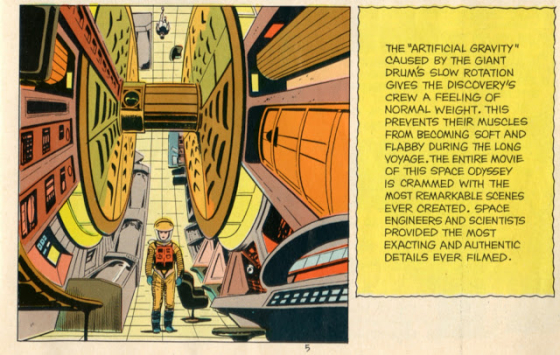