Nokia finally launched its Lumia 928 for Verizon on Friday without the traditional fanfare of its typical flagship announcements. While we're expecting a new Lumia at the company's London event on May 14th, we got a chance to sit down with the Lumia 928 and see how it matches up with the existing Lumia 920 device that launched back in October. 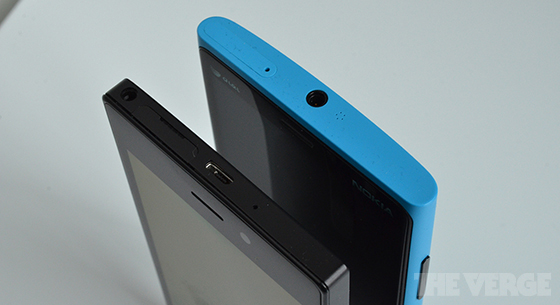 The look and feel of the Lumia 928 is greatly improved over the 920. Nokia has squared off the device and fitted a xenon flash at the rear for still photos. Other than the addition of an improved loudspeaker and microphone array, there's little change on the specs side. The camera sensor and lens are the same, and this really feels like a Lumia 920 for Verizon, with slightly improved camera capabilities. Comparing the two side-by-side, I noticed it feels a little lighter than the Lumia 920 and it's more comfortable to hold and navigate the Windows Phone UI. However, it's still a large and chunky device compared to competitors on the market — Nokia's design improvements have only gone so far here.

Nokia's loudspeaker on the Lumia 928 is clearly improved from the 920. Even at volume 20 on Windows Phone, the lock and camera sounds seemed louder that the same volume level on the 920. I couldn't test the improved microphone array, but Nokia tells me it has added a third mic to pick up distortion-free audio.

Nokia has swapped out its LCD display from the Lumia 920 for an OLED version on the 928. The colors pop, viewing angles are fairly decent, and there's the usual array of software improvements for daylight use. I also got a chance to try out the xenon flash, and it illuminates very brightly to fill a dark space with light. It's tough to say exactly how much better the image results will be over the 920, but stay tuned for a full review to explore if Verizon's Lumia 928 is a worthy upgrade to the Lumia 920.