Share All sharing options for: See a prototype of Detroit's ten-foot-tall RoboCop statue before it's cast in bronze

In 2011, Twitter user MT suggested to Detroit Mayor Dave Bing that a statue of RoboCop would make a "great ambassador" for Detroit. From that seed of an idea, the "Detroit Needs RoboCop" project raised over $60,000 through Kickstarter to actually build a life-sized or larger replica of one of the city's most famous icons. After two years of planning, scanning, and fabrication, the project's creators have posted pictures of a ten-foot-tall RoboCop prototype, ready to be cast in bronze and set up in the city. 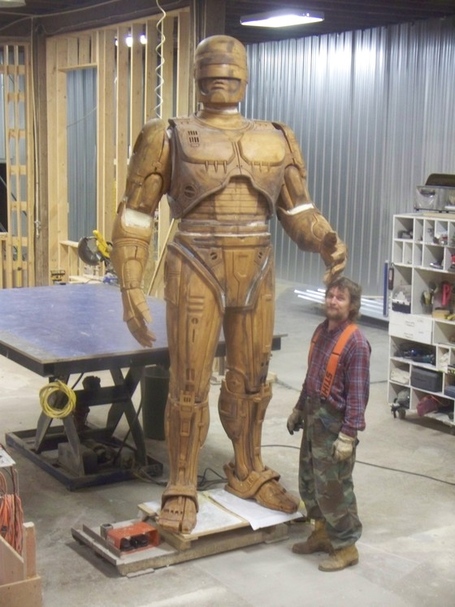 The above statue model was made by 3D-scanning a smaller model of RoboCop, then enlarging it and manufacturing individual pieces from foam, wax, clay, and steel. It will ultimately be cast by a local Detroit bronze works, and several sites have been proposed, though as of early 2013 the creators hadn't made a final decision. Many more pictures are up on Kickstarter, and Michigan's MLive.com has reported that the statue could be in place by mid-2014.