When T-Mobile first announced its "uncarrier" iPhone 5 plans in March, it touted a down payment of $99.99 and two years of $20 monthly payments, adding up to a surprisingly cheap $579.99, or $70 less than its AT&T counterpart. Unfortunately, that deal was apparently too good to last. TMoNews reports that the $99.99 pricing was apparently a one-month-only promotional offer, set to expire on May 13th. That's been borne out by T-Mobile's own store, which now sells the iPhone 5 for a down payment of $149.99 and a total price of $629.99 — eliminating most of the savings on the phone itself, though you'll still pay less up-front than on other carriers.

On its own, a price bump wouldn't necessarily be surprising or reprehensible: phone sales come and go every day. But T-Mobile didn't make it remotely clear that the $99.99 deal was temporary. Outside a screenshot of TMoNews, we haven't found a single mention of a promotion or change. The initial press release flatly promised a sub-$100 iPhone 5 for "qualifying customers," and as seen below, T-Mobile's own site still advertises the phone at its original price with no mention of an upcoming change. While the "uncarrier" option was never a clear-cut winner when stacked up against Verizon, AT&T, or Sprint, the iPhone's low price was one of its selling points. Now, it appears it's one that only early adopters will enjoy. 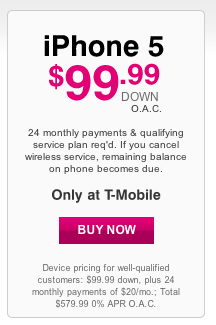