Facebook isn’t the only company that wants to give your Android experience a makeover. The Korean startup behind the massively popular messaging app KakaoTalk has just released KakaoHome — a launcher that lets you quickly reply to KakaoTalk messages without having to open the app, somewhat like Facebook Home’s vaunted Chat Heads. Reported by The Guardian, the app also lets you quickly check notifications for Kakao’s suite of apps, including the Tumblr-like KakaoStory, and KakaoGame, which is similar to Apple’s Game Center. 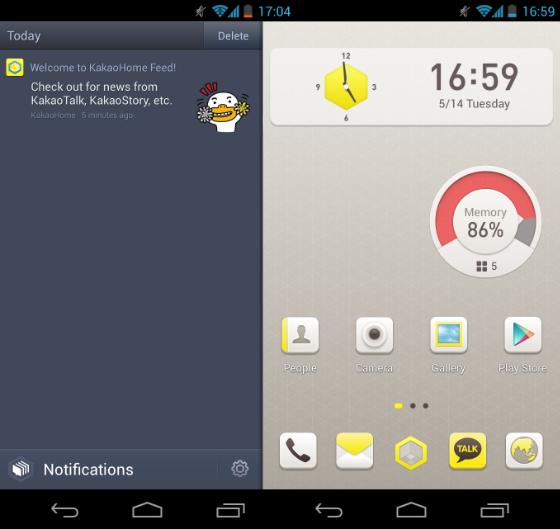 So far, KakaoHome is Korea-only, but we did manage to take a quick look at what it offers, and in comparison to Facebook Home, the UI changes are very minor. Instead of the full-sized photos that constitute Facebook Home’s timeline, KakaoHome (above right) is a more-or-less standard launcher. Swiping right from the homescreen will reveal your KakaoHome feed (above left), which includes all of your notifications from KakaoTalk, KakaoStory, and KakaoGame, which you can then act on. You can also download different themes if the standard beige doesn’t work for you. Otherwise, the only big piece of Kakao integration appears to be a Snooze KakaoTalk widget, which stops you from getting notifications from the chat service for up to eight hours.

Altogether, KakaoHome probably isn’t going to blow anyone away, even fervent users of the chat service. But it does look like the can of worms opened by Facebook Home could inspire a wave of imitations, of which KakaoHome is just the first. By this time next year, there could be a multitude of services all vying for that one precious spot on your smartphone’s homescreen. It looks like integrated launchers could be the new homescreen widgets.