Can fancy photos and lavish linking help Google+ take off?

Share All sharing options for: Can fancy photos and lavish linking help Google+ take off?

Almost two years in, Google’s social network hasn’t siphoned much activity off of Facebook. But even if Google+ doesn’t yet have all your friends, it does have one of the world’s most powerful data centers at its disposal. Starting today, the network will start leveraging that power, focusing on winning users’ photos by making them look better than they do straight out of your camera.

“Your darkroom is now a Google data center,” said Vic Gundotra, who leads Google’s social efforts, in an interview with The Verge. Images have become the most compelling part of Google+, and that’s by design: Google is betting that if it can get your photos, it can eventually get your friends.

The updates kick off a critical year for Google+, which launched as an effort to build the company a "social spine." In its first phase, the network created a single sign-on for all of Google’s services, inserted friends’ +1s and reviews into various search results, and built out an interest graph based on the behavior of logged-in users around the web. In the effort to unify Google’s products, at least, Google+ should be considered a success — though Gundotra says the company is only about 60 percent of the way done with that project.

The network now has 190 million people visiting plus.google.com each month, as well as 390 million logged-in Google account holders using its features monthly in at least one Google product. "It’s hard to believe it’s been under two years," Gundotra said. "We couldn’t be happier, with both those numbers and the trajectory and the growth that we’re seeing week over week."

At the same time, Google+ still suffers from the perception that it is largely irrelevant. Even as its user numbers grow, the average visitor spent just 6 minutes and 47 seconds on the site in March, according to Nielsen Media Research, compared with more than 6 hours on Facebook. Google disputes that number, saying it is far lower than what the company is seeing internally. Last year Google reported that the average user spends 12 minutes per day on Google+; it declined to share an updated figure. What’s not in dispute: Google+ lags far behind its peers in keeping visitors coming back.

Enter the data center. Google is betting that its powerful machine-learning algorithms will work not just to attract users to Google+, but to keep them there. And as with Instagram and Facebook before it, photographs will be central to the effort. Photographers were among the most enthusiastic early adopters of Google+, which alone among its peers displayed photos up to 2,048 pixels wide. (Last month Google began permitting full-size photos to be uploaded, though they count against the free 15GB shared-storage limit Google now has for Gmail, Drive, and Google+.) Until now, Google has worked to make Google+ the best online home for your photos. With today’s update, it wants to make your photos look better there than they do anywhere else.

With your permission, Google will now pick out your best photos, optimize them, and even create brand-new images and animations from your uploads. "We want to show people what happens when we combine your camera with the Google cloud," Gundotra said. "When you combine both, we think we can do magic. We can save you time. Because what we can do is we can take many of those labor-intensive processes like editing your photos, enhancing your photos — and believe it or not, we can do them automatically. We think that’s incredible."

The next step is to make those photos, along with everything else posted to Google+, feel more interactive. That’s where the redesigned feed comes into play. The three-column layout makes the site more information-rich and easier to scan, while new animations make it feel more playful than before. The data center comes into play with the stream’s new "related hashtags," which harness the company’s Knowledge Graph to connect text and photo posts with millions of entities that Google recognizes.

A picture of the Eiffel Tower will connect to other pictures of the landmark, even if it is never mentioned by name. A post about Buster Posey will connect to items about the San Francisco Giants, because Google understands that he plays on the team. The idea is to make Google+ stickier by giving visitors an endless series of rabbit holes to fall down — all generated automatically, by machine. 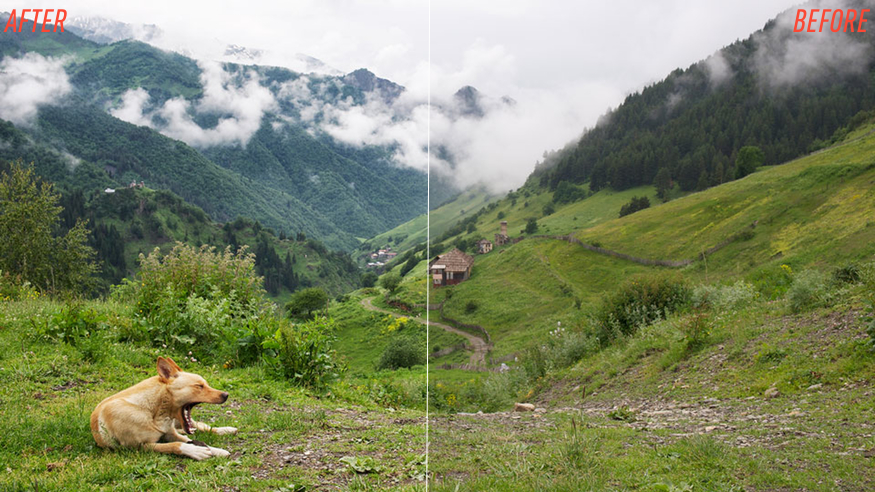 Connecting these new features together is the company’s redesigned messaging service, which unifies instant messages, texting, and voice and video chat under the Hangouts banner. If Hangouts becomes the communications hub for a healthy subset of Google users, it becomes that much easier for the company to draw users to its other social products.

Taken together, the updates to Google+ will test the notion that brute-force machine learning can bring new life to a social network. With photos, existing software to manage and edit images leave plenty to be desired. And in demonstrations with The Verge, Google was able to take photos shot by amateurs and make them look significantly better — softening skin tones, increasing contrast, and adding depth.

But it’s also true that successful photo apps like Instagram and Hipstamatic are not first and foremost about "improving" photos — they’re more about providing fun, easy ways to modify photos and achieve various effects. Google will leave in options that let more serious photographers fiddle. But the company is emphasizing its ability to "auto awesome" your work — and it’s possible those one-click "improvements" will instead feel more like a one-size-fits-all Instagram filter you’d rather leave off most of the time.

There is also room to be skeptical about the extent to which visitors to social networks will want to surf computer-generated hashtags, even if those tags are connected to Google’s Knowledge Graph. Some related tags could lead users to a treasure trove of photos and discussions; others will be likely to return a disappointing muddle. (On Twitter, where the hashtag originated, the case is more often the latter.)

Still, if the goal is to get people to spend more time using and talking about Google+, these are all sensible places to start. The network that attracts the most photos could someday be the one with the most users. It’s an approach that made major successes out of Flickr, Facebook, and Instagram. Google’s idea is to marry that vision with big data, crunching through text and photos to create a network that is broader, deeper, and more beautiful than any other. Could powerful algorithms be the secret to keeping people on Google+ longer? We’re about to find out.


Read next Exclusive: Inside Hangouts, Google's big fix for its messaging mess

Google I/O 2013: everything you need to know