Via The New York Times and Reuters

The US Department of Justice (DoJ) has called Apple's defense of its ebook practices "unconvincing" in a filing related to an upcoming antitrust case. Apple stands accused of colluding with major publishers to raise the price of ebooks with the launch of its iBooks app and store. The publishers and Apple have defended their actions as an attempt to break Amazon's grip on the market. However, all five of the named publishers in the case have settled with the DoJ, accepting terms that would prevent similar collusion from occurring again and leaving Apple alone to fight its corner.

Jobs told Murdoch to "throw in with Apple" to defeat Amazon

In a filing yesterday, the DoJ detailed an email sent by Apple's Steve Jobs to News Corporation's Rupert Murdoch — News Corp. is the parent company of HarperCollins, one of the publishers named in the original complaint. In the email, Jobs told Murdoch he could either continue to have Amazon price ebooks at $9.99, or "throw in with Apple and see if we can all make a go of this to create a real mainstream ebooks market at $12.99 and $14.99."

Apple contends that the email "reflects two executives wrestling with the realities of the e-books business," but the DoJ calls that argument unconvincing, citing "Mr. Jobs' acute awareness" that companies were unhappy with Amazon's pricing plans as proof that Jobs was aware of the publishing houses' plans for agency pricing. It calls Apple's defense "untethered from both precedent and logic."

Other publishers received similar requests for a shift in ebook pricing from Apple's Eddy Cue, who oversaw the iBooks launch. Cue also sent an email to Steve Jobs, attributing publisher Random House's agreement in part to the fact he had "prevented an app from Random House from going live in the App Store," says the DoJ, which will kick off its case against Apple on June 3rd in a New York District Court. The DoJ will hope to prove that Apple "facilitated a conspiracy of its suppliers to restrain" its competitors.

Update: Below is the full email from Jobs to Murdoch, originally spotted by All Things D. While the Apple CEO does recommend Murdoch "throw in" with his company, he also points to a likely future in which Amazon's shareholders demand that it start charging publishers the same 30 percent cut Apple was seeking, only beginning from Amazon's lower $9.99 price. 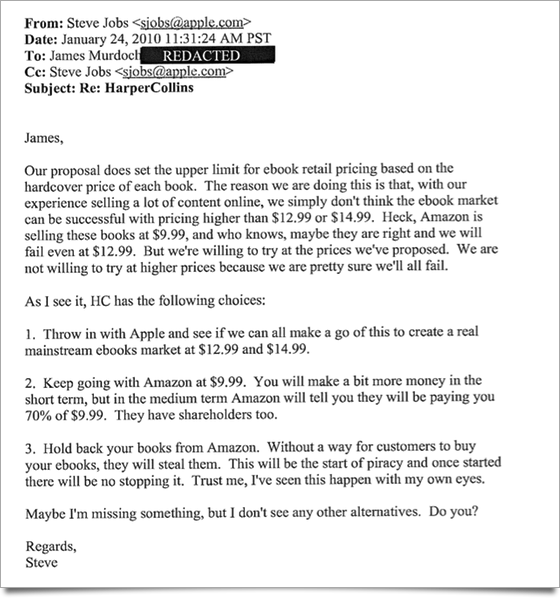