Google has updated its Play Books e-reader apps for iOS and Android to include support for EPUB and PDF files from outside the Play Store. The new feature has been enabled as part of Google's strategy to unite its cloud services, allowing users to either upload their ebooks via its website, or import them from their Google Drive storage. Google says that users will be able to store up to 1,000 files for free, as long as they are under 50MB.

Once uploaded, books will be available via the web, on Android smartphones and tablets, and the iPhone and iPad — page positions, bookmarks, and notes will be synced between each of those devices. With these features, Google's Book apps now have an edge over Amazon's Kindle and Apple's iBooks apps — which currently don't sync sideloaded titles between ebook libraries. 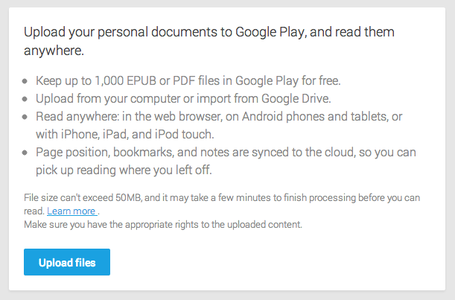