Until now only two third-party apps have been available for Google Glass: The New York Times and Path. Thankfully that's about to change. Today at Google I/O we learned that several new apps (or "glassware" as the company refers to them) are coming to Google's headset including Facebook, Twitter, Evernote, Tumblr, CNN, and Elle. Twitter for Glass lets users post photos to their timeline — these tweets are automatically tagged with "#throughglass" — and they'll also receive alerts for mentions, direct messages, and so on. 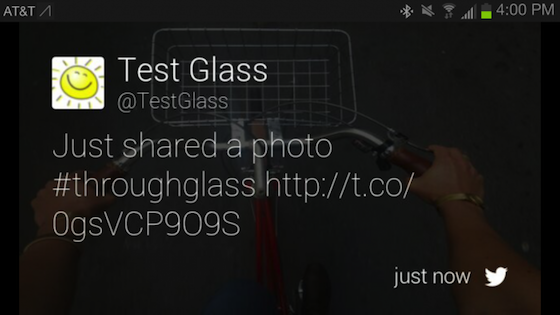 Facebook too is concentrating its early Glass development on photo sharing. After snapping a shot, you can immediately post it to your timeline and add a description through voice dictation.

CNN's app will give the NYT some competition in the news arena with video clips and the latest headlines. Glass owners can even customize what time of day they prefer to receive news alerts. Elle is the first magazine trying to bring its content to Glass, and it's put together an entire team to make that effort successful. The app can read stories aloud, and you can view photos that accompany each piece. When it comes to Evernote you'll be able to send text-based notes from the company's web client to Glass for reference later on.

Consumers may not be getting their hands on Glass for some time, but when they do, it's good to know that these major apps will be waiting for them.